Top Catalan and Spanish political and economic figures will take part in the annual Cercle d’Economia convention from Wednesday to Friday. The three days of conferences in  Barcelona will kick off with the Catalan president’s opening remarks. Catalan and Spanish government members, Italian prime minister Mario Draghi and South Korea’s president Moon Jae-In will participate in the event. The Asian leader will preside over the inaugural dinner alongside the King of Spain, Felipe VI.

As usual, the Spanish monarch’s visit to Catalonia has stirred controversy. Catalan president Pere Aragonès initially seemed to have agreed with his vice president, Jordi Puigneró, that the latter would attend the inaugural dinner with Felipe VI on Wednesday evening. Yet, Puigneró declined to do so on Tuesday afternoon, arguing scheduling problems. In the end, Laura Vilagrà, the presidency minister, will represent the Catalan executive at the meeting. However, Pere Aragonès and Felipe VI are very likely to meet at an informal, private gathering with South Korean businesspeople on Wednesday before the dinner. It will be the first time that both are at the same event since the Esquerra Republicana official was named president.

The pro-independence ANC civil society group has announced several rallies to protest against the monarch’s visit and pictures of Felipe VI were already burned on Tuesday. Over the past few years, Spain’s head of state has faced demonstrations every time he has visited Catalonia – for instance, hundreds showed their disapproval in July 2020 when Felipe VI visited Poblet’s iconic monastery as new details concerning the alleged corruption scandals of his father, former King Juan Carlos, were being published almost daily. 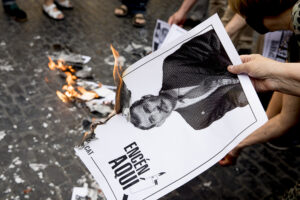 Pere Aragonès will kick off the 36th annual Cercle d’Economia meeting, and Barcelona’s mayor, Ada Colau, will also give a speech on Wednesday. The heads of large Spanish companies Telefónica, Banco Santander, Inditex and Puig will participate in a debate on the first day. King Felipe VI will take the floor during the welcome dinner, before the second day of sessions will be inaugurated by the People’s Party leader, Pablo Casado. Spain’s labor minister, heads of unions and business associations as well as local business leaders and officials will also feature on Thursday. Spain’s and Catalonia’s economy ministers will be present on the last day of meetings, as will Spanish president Pedro Sánchez.

The annual gathering will revolve around the challenges and opportunities for businesses, economy and politics in an edition where the discussions about the impact of Covid-19 are set to have a key role.