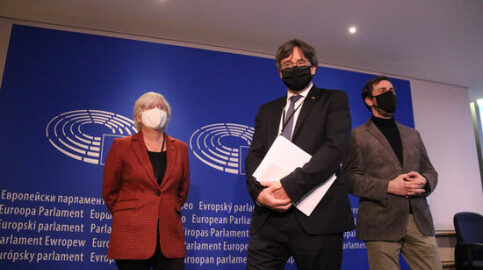 A European Parliament legal affairs committee report advises lifting the immunity of Catalan pro-independence leaders Carles Puigdemont, Toni Comín and Clara Ponsatí’s as MEPs. Following their appointment as European representatives, their extradition requests by Spain were frozen because they began to enjoy privileges as MEPs – yet, the Spanish judiciary is now requesting that they lose these privileges so the procedure which could end up in them being handed over to Spain can continue.

The European parliament will vote in early March on the exiled Catalan president Carles Puigdemont’s immunity – but before that, the report made by ultra-conservative Bulgarian MEP Angel Dzhambazki on whether their immunity should be removed or preserved will be presented next Monday to the members of the chamber’s legal affairs committee, and voted on by the group on Tuesday, 23 February.

The paper proposes waiving their privileges, and the pro-independence leaders’ group, Junts per Catalunya, denounced a “breach of confidentiality,” since the chamber establishes that no committee members can reveal the content of any report before its vote. They will file a formal complaint to the Parliament’s President David Sassoli, as the leak of the document is an unprecedented irregularity.