One hundred and seventy MEPs voted (Am 38, p.103) last week in favour of the right of all peoples to self-determination in an amendment to the document on Fundamental Rights in the European Union. Despite being rejected, the vote showed unprecedented support, covering almost a quarter of the members of the European Parliament.

As expected, self-determination gained very broad support among the progressive and pro-independence MEPs within the Greens-ALE group, with Diana Riba (ERC) promoting the amendment. Support came also from the majority of deputies of the alternative left (GUE-NGL) and the non-registered. An important part of the deputies of Identity and Democracy, which includes the Italian Lega Norte, and some of the conservative, liberal, socialist and popular members also voted in favour.

Despite the opposition from the socialdemocrat spokespersons, and especially from Spanish PSOE MEPs, almost 10% of this large group abstained or voted in favour. Among the ten members of the Social Democratic group who supported the amendment were the two Slovenian Socialists, who had previously defended self-determination, five Romanian MEPs, two Maltese and one Finnish. Among those who abstained were four Hungarians. And among the Social Democrats in the larger states, the only dissonant voice was Aurore Lalucq, the French MEP, who belongs to the greenest and most left-wing sector of the party.

Among the Christian Democrats, only three MEPs voted in favour, two of whom are Flemish. One is Kris Peeters, who was President of Flanders (2007-2014) and later Minister of the Belgian Government (2014-2019). Among the Liberals were three Bulgarians and the Basque Izaskun Bilbao. From the conservatives, a vote in favour came from extreme right leader Angel Dzhambazki, speaker of the supplication against Puigdemont, Comín and Ponsatí.

Most Italian MEPs are in favour of self-determination

If we look at support by member states, we find three with more than 40% of MEPs who voted for self-determination. In Italy they are an absolute majority, with the vote of 43 MEPs out of 76 (57%), including those from the 5 Star Movement, who govern with the Democratic Party, and those from the Lega Norte. There was also strong support from the representatives of the Republic of Ireland, with the affirmative vote of 6 MEPs out of 13, in a state with a history marked by the struggle for independence and which still today claims the right to self-determination of Northern Ireland. From Finland’s MEPs, 6 out of 14 voted in favour, including one socialist and one popular, which contradicted the official line of their European parties. 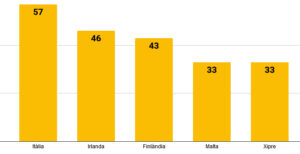 With the support of a third of MEPs we find two of the smaller states, which elect only six representatives. In Cyprus, the two Communist MEPs supported it, and in Malta, two of the four Socialist MEPs voted in favor and one abstained.

In absolute terms, the largest states in the European Union stand out. The first one is Italy, with the support of 43 deputies, followed by Germany, with 31 MEPs – mainly from the Greens and Die Linke – and also the French state, with the vote of 14 representatives, almost all of the joint candidacy that formed between sovereignists and greens.