Dozens of activists have blocked the headquarters of the European Commission and the European Parliament in Barcelona on Thursday morning to denounce the silence of European institutions on Spain’s repression of Catalonia’s pro-independence movement. Coinciding with the European Council virtual summit, protesters denounced the situation of Catalan political prisoners, exiles and “more than 3,000 people persecuted by the Spanish judiciary for political reasons.”

In a statement, they also say that with the immunity waiver of Catalan MEPs Carles Puigdemont, Clara Ponsatí and Toni Comín, “the values ​​of freedom, peace and defense of fundamental rights that until now represented the EU have been abandoned”. The action was claimed by the Civil Disobedience Platform, which states that the 42% of the critical votes at the immunity waiver vote “show the growing discredit of the European Parliament and the Spanish judiciary”.

They call for the European Council summit to address the “violation of the rights of a state that holds political prisoners, has exiled politicians and imprisoned and exiled singers” and reject court rulings that violate freedom of expression, creation, demonstration and thought. 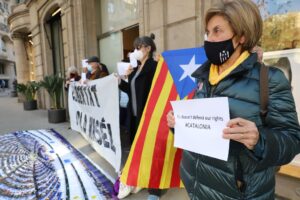 Finally, they ask the Catalan government for an explicit roadmap towards independence, abiding by the result of the 1 October 2017 independence referendum and the folowing declaration of independence.

Forty minutes after the action had started, police officers began removing the protesters who were blocking the entrance to the headquarters of the European Commission and the European Parliament.