Once again, the Catalan National Assembly (ANC) will be staging a massive demonstration in Barcelona on September 11, Catalonia’s National Day. The slogan this year is Objective: independence. ANC officials have emphasised that nobody has to renounce their personal views, but they argue that people must come together to achieve the common goal.

So far 60,000 people have already registered to take part in this year’s event, with an increase of 22.000 in the last three days. Although it’s somewhat less than last year, the ANC isn’t worried about the figure, as official T-shirts are selling faster than in 2018, with a total of 185.000 already. Furthermore, ANC sources have explained that 460 coaches have been chartered to bring demonstrators to the capital city.

In order to stage its eighth consecutive march, the ANC will be aided by other pro-independence groups, such as Òmnium Cultural and the AMI [an association of pro-independence local councils]. Last year’s march took place on Barcelona’s Avinguda Diagonal, where one million people gathered for independence.

As in previous years, the area where the demonstration will be staged has been segmented into several sections. The ANC has set up a website  to help participants register and pick one of the twenty-six sections available. Additionally, the grassroots group has included a map showing each section’s occupancy rate to ensure that demonstrators are evenly spread across the whole area.

One novelty this year is the chance to register up to five people with a single email message. Besides online registrations people are welcome to sign up by phone, Monday through Friday from 10 am to 2 pm and again from 4 to 8 pm by calling +34 93 655 82 82. There is also an email address participants can write to, if they have any questions: dubtes11s@assemblea.cat.

Plaça d’Espanya in Barcelona city will be the epicentre of the demonstration. At the press conference where the ANC unveiled their plans for September 11, ANC president Elisenda Paluzie stated that they “were looking for a large square with wide avenues leading into it, to symbolise a meeting point, independence, that you can get to along different roads”.

Up to five thoroughfares lead to Plaça d’Espanya, all of which are expected to be filled with people: Carrer de la Creu Coberta, Carrer de Tarragona, Avinguda del Paral·lel, Avinguda de Maria Cristina and Gran Via de les Corts Catalanes. This should paint a picture of unity towards a central goal.

As usual, the march will kick off at 17.14, but the ANC has advised participants to arrive an hour earlier. What’s more, it encourages travelling to Barcelona city early in the morning, as there will be plenty of activities and stands to visit in the city centre.

Local ANC chapters are chartering buses to travel to Barcelona city. They are hoping to match last year’s figure, when one thousand five hundred coaches were hired. Plaça Espanya and surroundings are well connected with public transport.

Vote With Your Wallet Fair

Carla Soler, a spokesperson for the ANC’s Rallying Committee, explains that “we are not merely encouraging people to rally, but also to find out about practical ways we can progress towards independence”. In an effort to boost its Eines de País [Tools for a Nation] campaign, the ANC is hosting a Fira de Consum Estratègic [Vote With Your Wallet Fair] with stands run by businesses and groups that support independence, as well as complementary presentations and activities.

In the morning of September 11, from 10 am to 3 pm, an Eines de País space will be active in Barcelona’s Pla de Palau and the surrounding streets, with activities aimed at sensitising the public about what they can do for independence. In the streets adjacent to Pla de Palau there will be stands manned by the companies that endorse the Consum Estratègic campaign, for anyone who wishes to take the plunge and change over to a Catalan provider.

During the 2017 independence bid it became apparent that large utility companies and banking corporations —among others— were siding up with the Spanish authorities. Since then, pro-independence grassroots groups have been encouraging the general public to seek more sympathetic, local alternatives.

As is customary, the ANC are selling an official kit specially designed for the year’s Diada rally. This time the official T-shirt is turquoise with yellow details, and it is made in Catalonia. The star printed on the front symbolises the objective of independence. 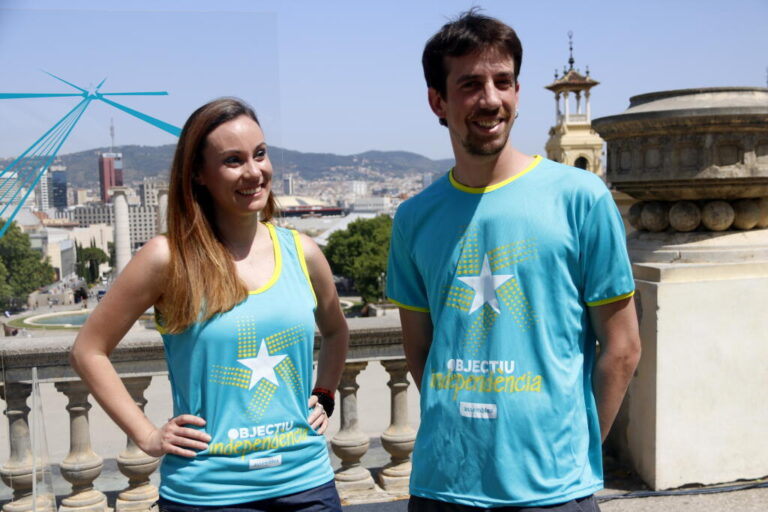 The T-shirts can be purchased from Vilaweb’s store, too.

No politicians at VIP zone

The leaders of the political parties will not be granted access to the VIP zone in this Diada’s event. They have not been issued an invitation. The decision was taken by a large majority of the ANC’s national secretariat and it reflects the discomfort that many local chapters are experiencing due to the lack of strategic unity among the pro-independence parties shown by government agreements such as the Junts per Catalunya coalition with the PSC in Barcelona’s provincial assembly and ERC’s abstention when PM-hopeful Pedro Sánchez put his candidacy to the vote in the Spanish parliament.