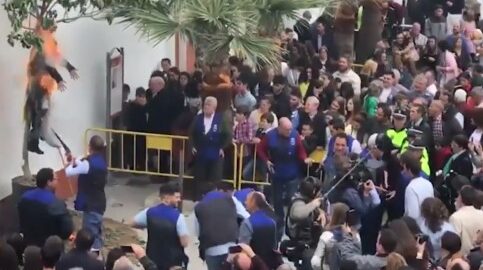 The Catalan government has decided “unanimously” to file a lawsuit against the act held in the southern Spanish town of Coripe during Easter, during which an effigy of exiled president Carles Puigdemont was burned and then shot.

Presidency minister and spokesperson Meritxell Budó said they see in the act a possible crime of incitement to hatred and discrimination, and expressed surprise that the prosecutor hadn’t yet taken action on its own accord, as the minister said they had done in other instances such as rapper Valtònic, or actor Willy Toledo. Budó also noted the lack of any lawsuit from Spain’s ruling socialist PSOE or Catalonia’s PSC parties, adding that they don’t expect there to be any before the Spanish elections on April 28.

Hung from a tree, burned and shot

Footage from Easter Sunday showed a town party in the Southern Andalusian village of Coripe, which featured the parading of an effigy of exiled Catalan president Carles Puigdemont – wearing a yellow ribbon in solidarity with the jailed and exiled pro-independence leaders.

The video revealed the politician’s likeness being hung from a tree, set on fire, and then being shot at with real shotguns and live ammunition.

Mayor of Coripe: “Not against Catalan people”

The Socialist mayor of Coripe, Antonio Pérez, argued that this is part of an annual Easter tradition called ‘The burning of Judas’, and called on the public not to “take it out of context.” For him, this is “satire” which is not “against the Catalan people.” “It is a celebration and a tradition like the Fallas,” he argued, referring to the Valencian holiday which sees multicolored and vibrant art, often satirical in nature, paraded through the streets and then burned with a fireworks show.

Meanwhile, the yearly ‘Burning of Judas’ tradition, an effigy fashioned in the likeness of a person considered to have done something “bad” throughout the year is burned and shot at. Antonio Pérez said in recent years “the protagonists have been bankers and arabs” (sic).

“They didn’t only want to shoot and burn me: they wanted to mock the fight for the freedom of the jailed and exiled leaders,” Puigdemont tweeted. He also criticized the Socialist party for allowing the event.

The top candidate for the Socialists in the Barcelona constituency and Spanish minister, Meritxell Batet, condemned the event and “all the acts of intolerance made during this campaign.”

On Monday morning, the Socialist party’s seat had its façade painted with several words, such as: “Burning in Coripe, a disgrace,” and “the Catalan Socialists remain silent.”