CDRs: the Spanish police frame-up that should be a lesson to everyone

On Thursday, ninety-five long days after their arrest, Alexis Codina and Ferran Jolis, two of the CDR members targeted in the Civil Guard’s “Operation Judas”, were released by the Spanish National Court. They put up bail of ten and five thousand euros respectively and could finally go home to their friends and family. Germinal Tomàs and Jordi Ros are still in prison and we all hope that they will be released soon as well. Last week, the judicial successor to Franco’s Public Order Court (Tribunal de Orden Público – TOP) freed Xavier Duch, Eduard Garzón and Txevi Buigas. Everything points to the case being a huge frame-up, completely lacking in evidence, fabricated to trap the Catalan independence movement politically.

It is worth recalling that these seven people – initially nine – were accused of forming part of an armed group, complete with its own ridiculous name, which was supposedly planning to commit terrorist attacks and occupy the Parliament of Catalonia in collusion with President Torra, no less. Well, according to the fake narratives going round at the time of the arrests, they were. 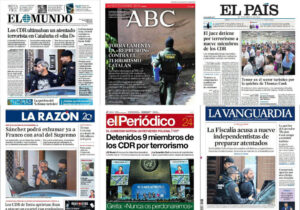 The preliminary investigation, for example, went so far as to claim that Alexis Codina was a member of what it described as the “production centre” responsible for the manufacture of explosives. Three months after sending them to prison, the National Court has rectified this allegation, confirming “the objective non-existence of explosives in Codina’s possession”. The substances found in his home – those famous “precursors” – are finally recognized as being nothing more than normal products.

With their release, however, it has become clear that the Civil Guard and the National Court had not actually been trying to dismantle a dangerous terror cell at all; if they had, the detainees would not be released so quickly. This was a politico-media operation and they wanted a part of the population to believe that the CDR members are violent and to bring the pro-independence parties and government into disrepute, based on the invention of a kind of Catalan ETA, which, in reality, does not exist. That is what they did and these seven young men paid for it. That is all there is to it.

Recognizing this fact should help us to cement in the public consciousness the mistrust with which we must always view such operations, such shameless manoeuvres, so unworthy of a democratic society. Unfortunately, today, we must also remember that there were independentists who, at the time, were unable to understand that, first of all, it is Spain that can never be trusted, not the people. I hope and wish, therefore, that today those who wondered if there was perhaps something real behind these arrests, see things more clearly now and will not make the same mistake again. Doubtless there will be more police frame-ups. Whenever it suits them or whenever they need one.

[This article by the editor-in-chief of VilaWeb was translated by @milfordedge and originally published in this blog].