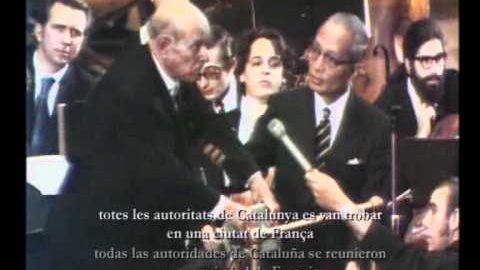 The 50th anniversary of famed Catalan cellist Pau Casals’ speech in the UN will be marked with a commemorative concert at Barcelona’s Palau de la Música on October 24 organized by the Catalan government and the Pau Casals Foundation. Four days later, another concert by Cuarteto Casals will take place in Geneva organised by the Delegation of the Catalan government. According to foreign minister Victòria Alsina, Casals’ convictions remain “an antidote to intolerance and injustice” to this day.

Widely regarded as one the most memorable speeches ever made by a Catalan, Pau Casals gave an impassioned address upon winning the 1971 Peace Medal in which he famously proclaimed “I am a Catalan.” Following his address, in which he praised Catalonia’s contributions to peace and democracy, he broke his vow to not play the cello in public as long as Spain was ruled by dictator Francisco Franco and performed El Cant dels Ocells, a traditional Catalan folk song he himself popularized.

Fifty years to the day the musician was awarded the distinction in recognition of his defense of peace, justice, and freedom, the Franz Schubert Philharmonic and the Orfeó Català choir will play Pau Casals’ Anthem for the United Nations, Johan Sebastian Bach’s Concerto for two violins, and Ludwig van Beethoven’s Ninth Symphony in the Catalan capital’s modernist music hall.

Images from the 1971 ceremony, as well as the entirety of Casals’ speech, will also be screened at an event that will end with El Cant dels Ocells. “The song has come to symbolize peace and harmony and expresses the longing the artist felt for Catalonia,” Jordi Pardo, the head of the Pau Casals Foundation, said on Thursday.

The life of Pau Casals

Born in 1876 in El Vendrell, in southern Catalonia, Casals learned music from his father and would go on to become one of the greatest cellists ever, widely praised for the recordings of the Bach Cello Suites, and playing for the likes of Queen Victoria and U.S. presidents Theodore Roosevelt and John F. Kennedy.

A supporter of the democratic Second Republic government of the 1930s, Casals fled Spain to escape the Franco regime and died in 1973 in Puerto Rico, his mother’s home country where he had resided for several decades, at the age of 96.