Exiled Catalan president Carles Puigdemont will be set free in Sardinia pending a final decision from the Sassari Court of Appeals on his potential extradition to Spain. This is according to his defence after the hearing on the politician ended on Friday afternoon. The exiled leader will have to remain on the Italian island of Sardinia, where he was arrested on Thursday evening, while magistrates deliberate on his case. So far his extradition request has not been dismissed.

The Catalan president who led the 2017 referendum and independence bid, in exile since then, traveled to Sardinia from Brussels on Thursday afternoon to visit the Adifolk folklore and cultural event taking place in the Catalan-speaking city of Alghero.

When the hearing ended, the director of his office, Josep Lluís Alay, told the press that the judge asked the current MEP if he would go to Spain after leaving the prison. He said ‘no’ and pledged to remain in Sardinia until the outcome of his case. The Sardinian public prosecutor did not request any precautionary measure on the leader of the pro-independence Junts party during the hearing.

Not clear whether arrest warrants are now active

It is not clear whether the Sardinian magistrates will consider the extradition request by Spain, since there are discrepancies on whether the EU arrest warrant on him is still active. Spanish judicial sources say the EU arrest warrant against Puigdemont is still active and has already sent all the warrant documentation to Italy. However, Puigdemont’s defence argues that when Spain’s Supreme Court issued a request on warrants on Catalan exiles to EU courts in March, the extradition request was suspended.

Indeed, the European General Court explicitly stated on July 30 that the arrest warrant against Puigdemont was considered suspended when Spain raised its question to the judges in Luxembourg in March. Spain’s Supreme Court judge Pablo Llarena, in charge of Puigdemont’s case in Madrid, argues that the ongoing queries filed to the European courts “do not modify” the warrants.

The Supreme Court has made numerous attempts in the past four years to have Puigdemont extradited but have failed on each past occasion. Click here for a full explanation of why the ex-Catalan president has been arrested and why past attempts have not been successful.

The morning after news broke of the arrest of former Catalan president Carles Puigdemont, up to a thousand pro-independence supporters gathered as close as they could get to the Italian consulate in Barcelona to voice their anger at the detention of the former Catalan leader. Up to a thousand people turned up on Avinguda Diagonal on Friday morning to call for the politician’s release and to denounce what they view as repression. 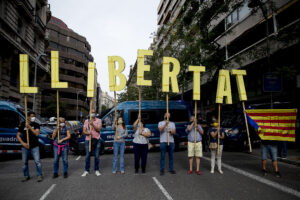 The crowd including many ministers from Puigdemont’s Junts per Catalunya party, as well as parliament speaker Laura Borràs, also a senior member of the party. Police units had cordoned off Carrer Aribau, where the Italian consulate is located, and as such most protesters gathered on Diagonal, one of the main streets that stretches across the whole city of Barcelona, which was cut off for a number of blocks.

In Girona, around 500 people gathered in front of the headquarters of the Catalan government to demand the “end of repression” and the “immediate” release of Puigdemont.

Further protests are planned for Friday evening at 8 pm outside various local councils, while a major demonstration is planned for Sunday in the centre of Barcelona.

All sides of the political spectrum have been reacting to the news that broke on Thursday night. On Friday afternoon, Catalan president Pere Aragonès gave an official statement in which he called for “freedom for president Puigdemont and all those facing repression,” and demanded the immediate release of the former leader of the Catalan government.

The ERC official said the arrest of Puigdemont has “shown that the Spanish authorities have acted unfaithfully towards the European justice.” “It’s also clear,” Aragonès added, “that this doesn’t help the negotiation process.” The Catalan president met with the Spanish president in mid-September to kick off a new era of the dialogue table between both governments to try to solve the independence conflict. “Now, more than ever, amnesty and self-determination is the only solution to the political conflict,” Aragonès concluded.

Parliament speaker Laura Borràs, a senior member of Carles Puigdemont’s Junts per Catalunya party, described her “indignation” upon hearing the news to Catalan News, as, she says, the former president’s “freedom is not being respected.” “He’s a free man in a free Europe, he has a political agenda across Europe. Last week he was in Paris,” Borràs explained. “Italy should be respecting the European courts and Spain should be respecting president Puigdemont’s political inviolability. If you are talking about peace and negotiation or dialogue and then you are arresting people and not considering their rights, these things are not compatible.”

The Catalan foreign minister, Victòria Alsina, said in an interview with TV3 public broadcaster that the cabinet believes the politician’s arrest is “irregular” because his EU arrest warrant is now suspended. She also said they have got in touch with “the top European, Italian and Sardinian authorities” on the issue. Alsina reminded that last month, Puigdemont was able to travel to Northern Catalonia, a Catalan-speaking territory now in France, and was not arrested.

Spain: ‘Puigdemont must face justice just like any other citizen’

In a press release by Spain’s secretary of communication, the government of president Pedro Sánchez explained that Puigdemont’s detention is “part of an ongoing judicial proceeding”. The former Catalan president, they said, will be “held responsible for his deeds at court,” and insisted that he must face “justice just like any other citizen.”

The head of the Spanish government reiterated the need for dialogue between Spain and Catalonia, saying it is “more important than ever” now. However, the Socialist head also considers it “obvious” that Puigdemont should face justice.