New revelations about the hidden fortune of former Spanish king Juan Carlos indicate that in 2008 he deposited hundred million dollars into a bank account in Geneva. According to the newspaper Tribune de Genève, the money was part of a gift from King Abdullah of Saudi Arabia. The account was in the Bank Mirabaud and belonged to the Lucum Foundation, a Panamanian entity with Juan Carlos I as the sole beneficiary. 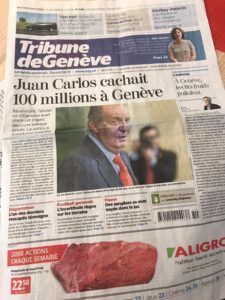 According to the Swiss newspaper, the Spanish king withdrew money from this account for years, until in 2012, much of what was left, about sixty-five million, was given to Corinna zu Sayn-Wittgenstein, a lover of the monarch, who deposited the money in the Bahamas. These transactions, which have so far not been made public, are under criminal investigation by the Swiss authorities, who consider ‘suspected money laundering’.

The investigation began in 2018, when Spanish newspapers revealed audios in which Corinna zu Sayn-Wittgenstein claimed to have hidden money from Juan Carlos. In those recordings, he said that he wanted a commission for the TGV high-speed train contract in Mecca, won by a Spanish consortium after making a last-minute cut of 30% of the budget.