After decades of protests, most highway tolls in Catalonia are lifted

When the tolls of four major highways in Catalonia are lifted on Tuesday at midnight, a historic shift will take place: the number of kilometers of toll-free roads will surpass those of toll motorways for the first time in decades. With Spain having the most extensive high-capacity road network in Europe, stretching over 12,000 km, Catalonia has long been the territory with the highest number of toll highways, over half of its 1,719 kilometer-network.

For years, locals saw it as yet another economic grievance, with grassroots groups organizing repeated protests to pressure Catalan and Spanish authorities into terminating toll concessions to make driving more affordable. These protests paid off. And their biggest victory will come with the end of tolls on the AP-2 and AP-7 motorways—connecting Barcelona with the capitals of Girona, Tarragona and Lleida, as well as Spain’s Aragon region and France—and also the C-33 and C-32 highways, north of the Catalan capital.

Grassroots groups have called for a night of festivities at empty toll booths to celebrate their success, but also to warn authorities against possibly reimposing new tolls in the future. Spain plans to turn all public-managed highways into toll roads in 2024, as a first step toward making drivers pay for the use of an increasingly expensive road network and to compensate for traffic pollution. The measure, announced last May, is one of the conditions that EU authorities demand from member states in order to receive European recovery funds.

The AP-2 and the AP-7 motorways are owned by the Spanish government, and the C-32 and C-33 highways by the Catalan government. From now on, taxpayers will cover the maintenance of these roads.

What tolls are being lifted?

As estimated with current mobility figures, AP-7 and AP-2 users will save a combined total of 515 million euros a year, according to Spain’s Ministry of Transports, Mobility and Urban Agenda. But the number could rise to 752 million euros if the number of drivers using the highways increases as expected.

All highways that will continue to operate as toll roads from Wednesday are owned by the Catalan government, adding up to 130 kilometers, and their concessions will terminate between 2036 and 2039. These toll roads are the Cadí tunnel in Lleida (€12), the C-32 from Castelldefels to El Vendrell (€11), and the C-16 from Barcelona to Manresa, including the Vallvidrera tunnels crossing through Barcelona’s Collserola mountain range (€14.95).

The so-called shadow tolls (“peatges a l’ombra” in Catalan) are privately operated roads shifting the economic burden from drivers to all taxpayers, with the company letting vehicles circulate for free, but then charging the Catalan government for every user.

Shadow tolls account for 345 kilometers of highways, mostly in central and northern Catalonia, far surpassing the 120 kilometers of toll roads that will still be in operation from Wednesday. It is estimated that shadow tolls cost Catalans 180 million euros a year, with contracts with the private firms Cedinsa and Iridium terminating in 2038 and 2041.

In all, 340 people will be laid off following an agreement between unions and Abertis, the company operating the highways up until now. The layoff will affect toll workers, employees working in central offices and customer service, with the exception of maintenance staff. 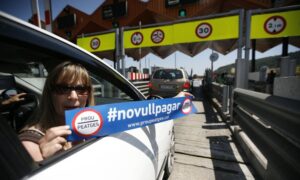 Throughout the decades, grassroots groups in municipalities with toll roads and drivers in general have demanded the end of toll roads, taking part in hundreds of mobilizations. Nearly ten years ago, the ‘No vull pagar’ (I don’t want to pay) movement became the most popular protest action ever taken against toll roads.

On 29 March 2012, Josep Casadella, from the town of Anglès, in Selva county, recorded himself in a video telling toll workers that he didn’t want to pay the fee. He said that Catalonia was being discriminated against, since other Spanish regions didn’t have that many toll roads. Employees eventually let him go, lifting the barrier but keeping the red light.

The video went viral at a time when the Catalan independence movement was gaining momentum, fueled by an increasing distrust in Spanish institutions. More and more people recorded themselves imitating Casadella and a platform was created under the motto ‘No vull pagar’. The tipping point came on 1 May 2012, when thousands of drivers flooded the AP-7 highway, forcing workers to lift barriers and keep them up to avoid long lines of traffic.