A profile of Miguel Ángel Carballo, the Spanish prosecutor behind the detentions of Catalan activists

‘Neutralisation operation and terrorist group of a Catalan separatist nature.’ This is the title of a press release from the Spanish Public Prosecutor’s Office reporting on the operation to apprehend nine pro-independence activists which resulted in the Guardia Civil raiding various addresses in Catalonia last Monday.

It is signed by Miguel Ángel Carballo Cuervo, Deputy Prosecutor of the Spanish National Court. He is responsible, one week before the second anniversary of the 1 October referendum, for an unprecedented deployment of some 500 Guardia Civil officers, plus assorted helicopters and drones, to arrest nine pro-independence activists, escort them from their homes, in front of their families, turn their houses upside down, and take them to Madrid charged with terrorism, rebellion and possession of explosives. 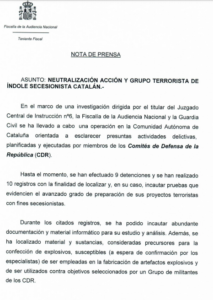 A virtually identical operation was carried out against Tamara Carrasco in Viladecans, in April 2018. The prosecutor who wanted Carrasco to be remanded in custody in Madrid on charges of rebellion and sedition was the same individual: Miguel Ángel Carballo. He was unsuccessful because Judge Diego de Egea deemed it unnecessary, as the charges of terrorism and rebellion were unsubstantiated. Subsequently, however, Tamara Carrasco spent a whole year confined to her hometown, unable to leave Viladecans, until a judge chose to hear the case against her for public disorder, thus prolonging a highly distressing situation for no apparent reason.

However, the case against Tamara Carrasco and Adrià Carrasco (the latter managed to evade the Guardia Civil before going into self-imposed exile in Belgium) both presaged Spain’s decision to launch a direct attack against the Committees for the Defence of the Republic (CDR). The CDR make up a network of pro-independence groups that function on a local, regional and national level in Catalonia and were originally created to defend the 2017 Catalan independence referendum.

It was a time of mass demonstrations against Madrid’s crackdown, following the recent detention of President Puigdemont in Germany. The mastermind of the persecution was the prosecutor Carballo, who stated, for example, that Tamara Carrasco was “conducting and coordinating acts of sabotage” and that she “was part of a small leadership team which established the rules of engagement and the slogans used in demonstrations”, with the aim of “taking the Catalan independence process onto the streets with violent action”. Masks of Jordi Cuixart’s face and yellow whistles were seized from Tamara Carrasco’s home. At Adrià Carrasco’s house, the police confiscated shoelaces from a pair of Catalan espadrilles, in the presence of his mother, as proof of his involvement in rebellion and terrorism.

The first persecutor of the 20-S protest

Carballo has once again turned his attention to the CDR and the entire Catalan independence movement. However, his role in silencing those in favour of independence dates back to the days after 20 September 2017. He was the one who brought the first charges of sedition before Spain’s National Court, expressed in a generic manner, as if to open the door to a larger case against all the demonstrators gathered outside Catalonia’s Ministry of the Economy that day, while highlighting Jordi Sànchez and Jordi Cuixart’s role in particular in staging the protest.

Carballo completely ignored the people’s right to protest and freedom of assembly, together with the protestors’ freedom of expression, when stating in the charges that the protestors wished to “impose an unconstitutional independence referendum through the use of intimidation, informing the state of their intention and ability to act, even violently, in the event of any opposition”.

National Court judge Carmen Lamela agreed to see the case, leading to Sánchez and Cuixart being sent to prison without bail, initially on charges of sedition. Days later, as a prosecutor, Carballo opposed the release of the two civil society leaders on bail, and Lamela sided with him. Next month marks the second anniversary of their imprisonment.

The case against Jordi Sànchez and Jordi Cuixart was referred to the Spanish Supreme Court, which took over the investigation into the Catalan government and the Parliamentary Bureau. But Lamela kept the cases against Major Josep Lluís Trapero and the leadership of the Catalan police in the National Court, as two parallel investigations. Initially they were also charged with sedition and subsequently rebellion. Miguel Ángel Carballo wanted Trapero to be held on remand, like Sánchez and Cuixart, but Lamela granted him bail while forbidding him from leaving Spain.

The case against the head of the Catalan police has now been pieced together, and although Trapero isn’t due to stand trial until 20 January, the part played by the Mossos was already a central component in the trial against the jailed Catalan leaders, with endless accusations of involvement in the rebellion and of having boycotted the Spanish police and the Guardia Civil. Carballo was the mastermind behind the whole case.

In Monday’s press release on the raids against the independence activities, Carballo speaks of ‘terrorist projects with secessionist ends’, adding that during the searches the police found ‘precursor substances for the production of explosives, capable (pending official verification) of being used in the manufacture of explosive devices and against targets selected by a group of CDR militants’. He adds that they were convinced that ‘actions were to be carried out’ between the anniversary of the 1 October referendum and the ruling in the trial against the Catalan leaders, and that they would have resulted in ‘irreparable damage’.

There is an ongoing attempt, an obsession, with linking the CDR’s actions with an ideology and a language of violence, which hasn’t been seen since the years of the troubles in the Basque Country, with accusations of terrorism, possession of explosives, raids on people’s homes by heavily armed police and so on. Carballo is head of the National Court’s ‘antiterrorist’ investigation unit, and is responsible for the probe into the 17 August attacks.

Last week Carballo refused to look into the links between the imam of Ripoll, the leader of the jihadist cell that staged the attacks, and the CNI [the Centro Nacional de Inteligencia or National Intelligence Centre]. In doing so he fully endorsed the prosecutor’s office’s position. From the very beginning, Carballo refused to accept any such ties existed, and he made sure that the affair was buried, that no one would investigate it or sift through the evidence. For the time being, he has got away with it.

On October 2, Carballo will be awarded with the highest decoration of the Spanish police.