Socialists win the vote, followed closely by Esquerra and Junts per Catalunya, while far-right Vox enters Parliament for the first time

With over 97% of the ballots counted in the Catalan election, results put pro-independence parties on course to retaining their , with ERC and JxCat in a neck and neck race for second place with 33 and 32 seats respectively. With CUP’s 9 seats, it’s the third election in a row with a pro-independence majority at the Catalan Parliament (74 seats) and, for the first time, they surpass the magical figure of 50% of the votes, with 51,27%.

The Socialists are tied at the top with ERC, with 33 MPs, but prevail in terms of vote share (23% vs 21%). The Socialists are experiencing a stunning rise in votes, but it’s doubtful that their victory will allow them to form any alliances leading to government. 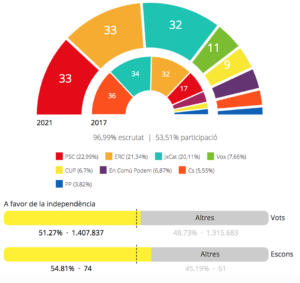 Once votes are counted, this will fire the starting pistol on the talks to form the next government, with 8 parties in Parliament.

The far-right will enter the Catalan parliament for the first time – Vox is on course to obtaining 11 MPs, securing the fourth place if the counting does not change their final result.

The elections were held despite worries about the Covid-19 pandemic, after the Catalan government decision to postpone the election beyond February 14 was overturned in court. A significant drop in voter turnout occurred with only 45.6% of voters casting their ballots by 6pm. With 97% of the counting, the turnout is 53%, the all-time low since the reestablishment of democracy in 1980.