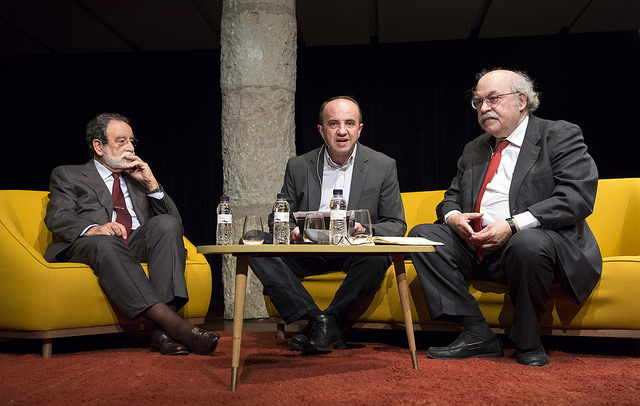 That was the official position. However, the Spanish authorities didn’t garner unconditional support across the board. In fact, the EU did play a role in the way events panned out in October 2017. At the end of September 2017, ahead of the independence referendum, Angela Merkel and other European leaders had already mentioned to PM Mariano Rajoy that they were concerned about his policy on Catalonia. That was merely a pre-emptive statement to voice their discomfort, which became patently clear between October 2nd (the day after the independence vote) and October 27, when Catalan independence was declared.

A hypothetical mediation by the EU had a bearing on the Catalan government’s decisions at the time. On October 10 Catalan president Carles Puigdemont received a phone call from Donald Tusk, then president of the European Council, who asked him to refrain from taking any irreversible steps. Puigdemont decided to put the declaration of independence on hold. In previous days, Angela Merkel and Jean-Claude Junker, the president of the Commission, had discussed the matter of Catalonia. They concluded that they must put pressure on PM Rajoy to establish a dialogue with Catalonia.

The ensuing days saw further calls to dialogue, but these lost momentum as the Catalan government dithered. However, there is little doubt that the matter featured prominently on the European agenda in the weeks following the referendum. During the European Council’s summit held in Brussels on October 19th and 20th Germany publicly confirmed that Rajoy had failed to remove the Catalan issue from the agenda. However, once the session was underway, the Spanish premier refused to discuss the matter claiming that it was an internal affair, even though Merkel and Tusk explicitly asked him to. When Spain invoked Article 155 of the Spanish constitution [bringing Catalonia under Madrid’s direct rule] in response to the declaration of independence on October 27th, the EU finally closed ranks with Spain. Yet was an EU mediation ever on the cards?

Did the PP thwart the Commission’s offer to mediate in the conflict?

Even though tensions did not end there, on October 4th the European Commission publicly refused to play a role when Frans Timmermans slammed Catalonia’s independence efforts in very harsh terms. Yet now Spain’s PP-friendly media have begun circulating a narrative whereby it was the Rajoy administration’s diplomatic prowess that prevented the European Commission from intervening [in the Catalan conflict]. The story implicitly points fingers at the current government’s meek diplomacy, which PP leader Pablo Casado has openly blamed Pedro Sánchez for. He recently stated that “PM Sánchez’s chaotic government is Spain’s greatest weakness abroad”.

Earlier this week Madrid daily La Razón —a PP-leaning newspaper— ran a vague yet curious story claiming that on October 4th, 2017 Timmermans was ready to announce that the European Commission would be mediating in the Catalan conflict but Mariano Rajoy’s government prevented it at the eleventh hour. La Razón claims that there was “a major crisis” on October 2nd because the president of the European Commission, Jean-Claude Juncker, had put it in writing that he would “seek a mediating role”. The story goes on to say that Juncker had to travel to India unexpectedly —in actual fact, the trip had been scheduled before the Catalan vote— and that Timmermans was willing to read the speech on his behalf.

La Razón’s story, which [far-right] Vox MPs have alluded to, states that “Jorge Toledo, then [Spain’s] Junior Minister for EU Relations, rushed to Brussels after [PP MEP] González Pons warned him of the impending move and together they managed to persuade Timmermans not to read the speech”. Instead, in his address the European VP spoke in no uncertain terms about the need for the Catalan government to obey the law and about Europe’s support for a united Spain. La Razón claims it was all down to the PP’s efforts: “if a mediation proposal had been made, history would have been dramatically different”. The Madrid paper adds a vague comment accusing the current PSOE administration of being soft on diplomacy: “Presently Europe would not regard such a mediation attempt as an outrage, but a means to put wind in the sails of bilateral talks between Madrid and Barcelona”. Where does such an idea come from? We don’t know. They argue that “there is no official decision on the matter and it is merely a reflection of the current climate within Europe’s diplomacy”. But they hint that this sort of thing would not happen on the PP’s watch.

Either way, they blame the socialist administration for the alleged risk of a European intervention in the Catalan conflict today. They claim that “Europe’s diplomacy is acting behind closed doors to promote Scotland’s separation from the UK” and they add that “they need Spain to stop vetoing a Scottish referendum”. This narrative alleges that Brussels plans to take advantage of Pedro Sánchez’s admission that the Catalan conflict is political in nature. Steering an alleged negotiation on Catalonia, they claim, would place the Commission on a favourable footing internationally to pave the way for a second independence referendum in Scotland.

The waning influence of Spanish diplomacy

These days the Spanish right has put the matter of Europe and Catalonia back on the agenda in the aftermath of the Spanish government’s decision to pardon the Catalan political prisoners. The PSOE-Unidas Podemos coalition government has made three diplomatic blunders in a row and the PP, Vox and Spain’s nationalistic media have been capitalising on them for weeks. Firstly, we had the migrant crisis with Morocco, which served as a reminder that the Moroccan government can easily shatter the balance that protects the fragile borders of Ceuta and Melilla [Spain’s enclaves in northern Africa]. Secondly, the Spanish opposition blamed PM Sánchez’s no-meeting with Joe Biden —the US president only spared a minute to talk to the Spanish leader at a recent NATO summit— on Spain’s international irrelevance, which they put down to the incumbent PSOE administration. And, thirdly, there is the damning report published by the European Council on Spain’s crackdown against Catalonia’s independence supporters.

All three crises are indicative of Spain’s waning diplomatic influence in Europe and across the world, which has been particularly detrimental to PM Sánchez’s government. Key players in Europe that Spain used to rely upon have lost power since Ursula von der Leyen became president of the European Commission. The kernel of Spanish influence in Europe was largely built around Juncker and its members have now scattered down to lesser positions. The post of Europe’s top diplomacy boss, an office currently held by Spain’s Josep Borrell, saw its powers watered down during Federica Mogherini’s term, before Borrell took over. Furthermore, PM Sánchez failed to secure places in international bodies for individuals he could trust. Spanish minister Pedro Duque was turned down to lead the European Space Agency and VP Nadia Calviño failed to become president of the Eurogroup.

Furthermore, things aren’t looking up for Spain on the legal front in Europe as far as the Catalan issue is concerned. Not only has the European Council urged Spain to free the Catalan prisoners, allow the safe return of the exiles and end the crackdown, but the harsh rulings issued by Belgian and German courts dismissing the European Arrest Warrants filed by Spanish judge Pablo Llarena have cast doubt over the democratic nature of Spanish justice. A court in Belgium denied the extradition of Catalan minister Lluís Puig because his basic rights would have been jeopardised in Spain, while a German court summarily dismissed the rebellion charges brought against president Carles Puigdemont.