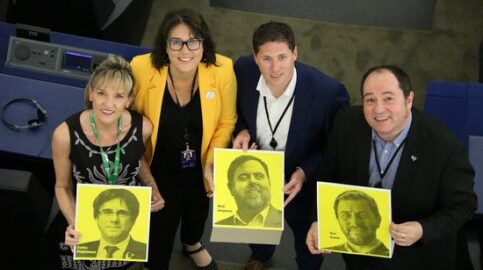 Catalan political prisoner Oriol Junqueras hopes to be freed in the coming days in order to take up his seat as a Member of the European Parliament (MEP) in the upcoming plenary session, beginning on January 13 in Strasbourg. The European chamber confirmed his seat on Monday and activated his web profile, and his lawyer commented on Twitter shortly afterwards: “He is MEP, he has immunity, he has to be freed in order to attend the European Parliament.”

This European parliament announcement came a few weeks after the European Court of Justice confirmed Junqueras should have been freed in June, right after being elected as an MEP in the EU election in May, because he should have been granted immunity from that moment – Spain denied it in June. Despite the EU court’s ruling, Spain’s electoral board denied his hopes of taking up his seat in the continental parliament last week.

The whole issue stemmed from the Supreme Court asking the EU court whether Junqueras should be granted immunity – and their interpretation of Luxembourg’s answer has not yet been revealed. Now Spain’s top judges will have to rule on the underlying issue of Junqueras’ status, and on the electoral court’s decision.

Meanwhile, exiled president Carles Puigdemont and Toni Comín, both former cabinet members who were elected as MEPs in the EU election like Junqueras, were able to pick up their definitive accreditation as such on Monday. They are expected to attend the session next week in Strasbourg, and the three Catalan leaders have already been given their own profile pages on the website of the European chamber.

The Supreme Court has to decide whether the extradition case is dropped – yet, it is more likely that it is suspended while judges ask the EU parliament for official permission to prosecute them – Junqueras’ case could also end up in the same parliamentary proceeding.

Both politicians have also asked the Spanish Constitutional Court to order the Supreme Court to lift its arrest warrant against them on Spanish soil. For the time being they are allowed to travel anywhere in Europe except for Spain as they have immunity, and Belgium has suspended its open extradition case against them pending the Supreme Court decision.