The long-awaited debut of Puigdemont and Comín as MEPs

Amid great media expectation, Catalan exiled president Carles Puigdemont arrived in the EU parliament, in Strasbourg, on Monday, to make his debut as MEP seven months after being elected by voters in the May EU election. He arrived along with former minister Toni Comín a few hours before the beginning of the plenary session. 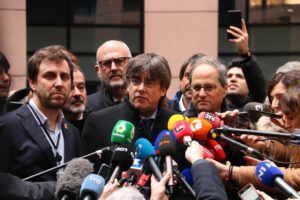 Puigdemont talked to the press and referred to the more than 2 years since he went into exile after being ousted from the Catalan presidency. “We’ve overcome 2 years of obstacles aimed at preventing us from doing politics,” he said. “A lot of resources have been spent in order to prevent us from being here.”

He also sent a message to Brussels: “Today we can say that the Catalan crisis has impacted the EU’s pillars. The EU can’t continue to look elsewhere.”

Although he said his first appearance as an MEP was a “long-awaited moment,” he also criticized that his former vice president, Oriol Junqueras, has not been permitted to be in Strasbourg. Junqueras, who also won an MEP seat in the May 2019 election, was barred from having immunity and from taking up his seat by Spain’s judiciary while in provisional detention. 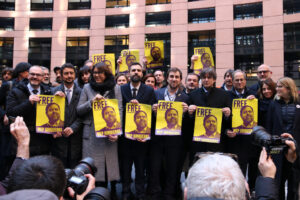 In December, the EU court ruled that he should have been able to attend as Member of the European Parliament and confirmed his immunity. The Union’s chamber subsequently accepted him last Monday but last Thursday he was not allowed to leave jail to attend.

Spain’s Supreme Court ruled he had no right to either freedom or immunity arguing that the EU court was only referring to when he was in provisional detention – the pro-independence leader was given a final sentence barring him from office and convicting him to 13 years in jail on October 14, 2019. As a result, the EU parliament stripped him of his MEP status on Friday.

Along with a few hundred pro-independence supporters, president Quim Torra, Catalan, parliament speaker Roger Torrent and foreign action minister Alfred Bosch were also in Strasbourg to give their support to the two Catalan MEPs.

Torra called it “a day of celebration,” adding that “we are Europeans and we want to be here, where the important issues of Europe are decided.” The president also made reference to Junqueras, saying “we will do everything necessary for him also to be here.”

“We have come to demand justice,” said Torrent, who warned that denying Junqueras his MEP seat puts “the foundational principles of the union at risk.” He also accused the EU authorities of “allowing a court to interfere in the composition of the European chamber.”

Bosch also spoke about Junqueras, saying he could not be in Strasbourg for the plenary session because “he has been kidnapped by the Spanish courts.” Bosch added that “this is not over” and said they would appeal the decision to strip Junqueras of his seat.