What is the relationship between the interest in politics and the support for the independence of Catalonia?

The result of Britain’s 2016 vote to leave the UK was a shock to many. Driven largely by older, right-leaning, anti-immigration eurosceptics, the vote to “leave” beat the vote to “remain” 51,9% vs 48,1%. The UK is still wrestling with how to implement the result. 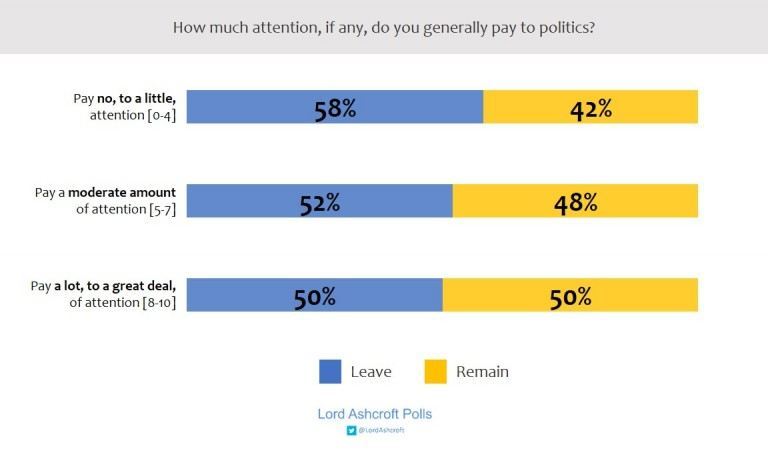 The correlation between level of interest/engagement in politics and certain political attitudes is not unique to Brexit. In the US, the Pew Research Center has shown that those who say they “pay attention to politics” are generally more likely to vote for the democratic party, whereas those who say they pay less attention are more likely to vote for the Republican party. Trump’s support comes disproportionately from those who don’t pay engage or show substantial interest in politics. 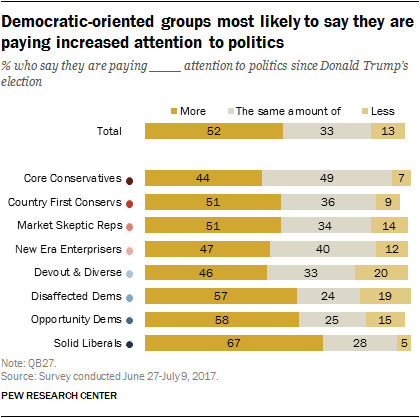 What’s the case in Catalonia? Who is engaged (interested and informed) about what’s happening in politics, and what is political engagement’s association with support for independence and self-determination? Let’s take a look at the data.

We’ll use CEO/BOP data, a regular survey of Catalans on their political opinions. We’ll examine the survey questions pertaining to interest in politics and level of being informed about politics. 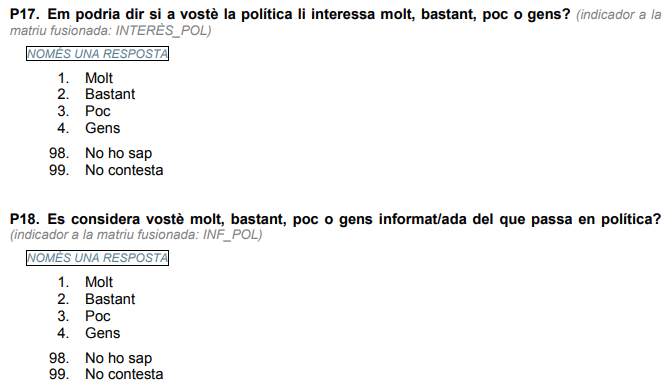 It’s worth starting with an often neglected fact: a large majority of Catalans favor self-determination, with fewer than 20% being explicitly opposed. 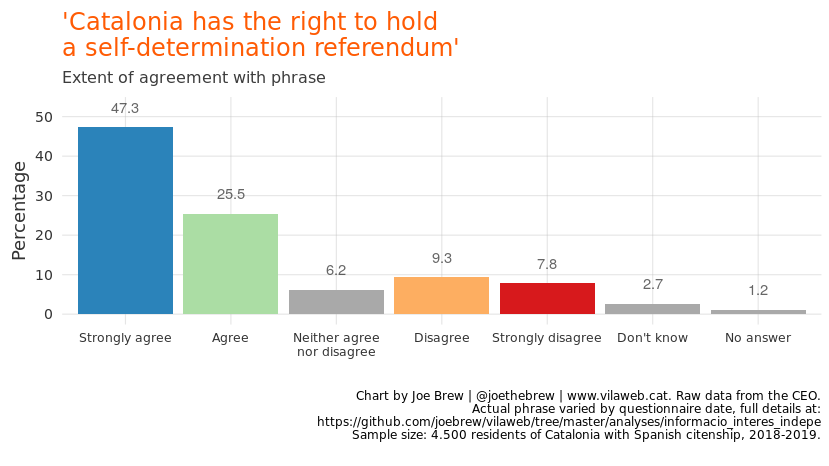 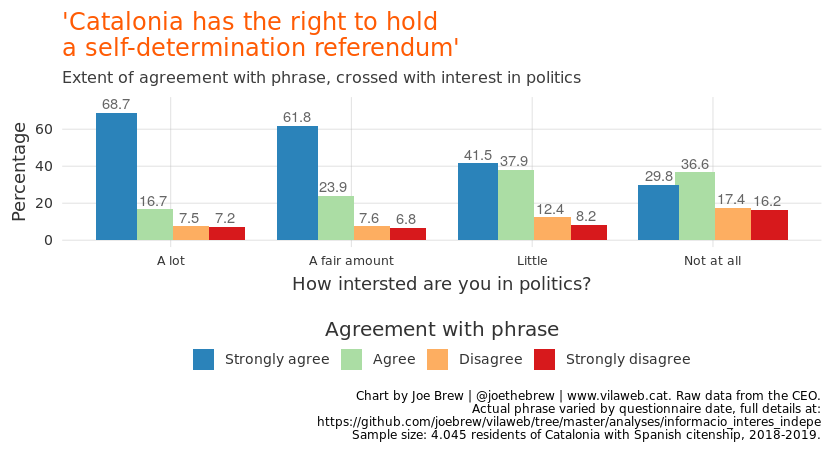 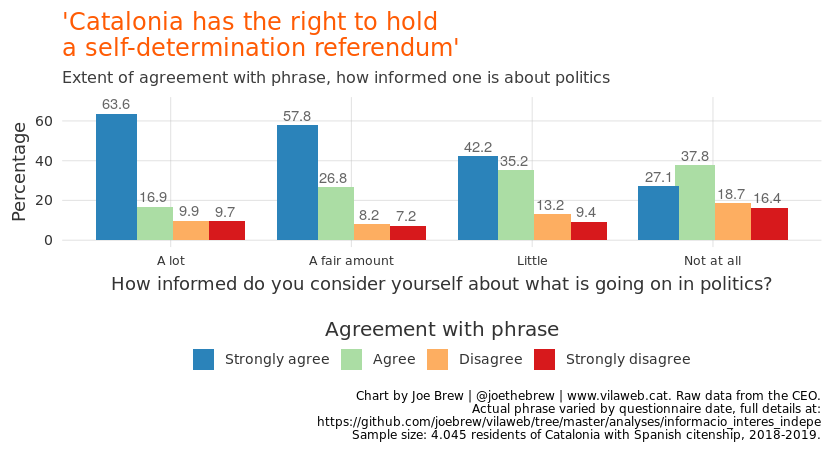 Surveys are somewhat volatile (due to small sample sizes and bias), but we can get more reliable results by aggregating them. The below shows the combination of all CEO BOP surveys from 2018-2019 (3 in 2018, 2 in 2019). The split is close to 50-50%, but more Catalans want to be independent than remain part of Spain. 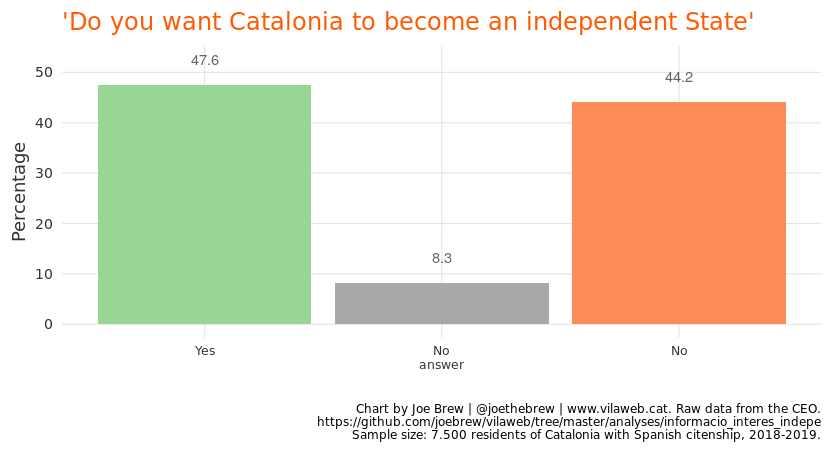 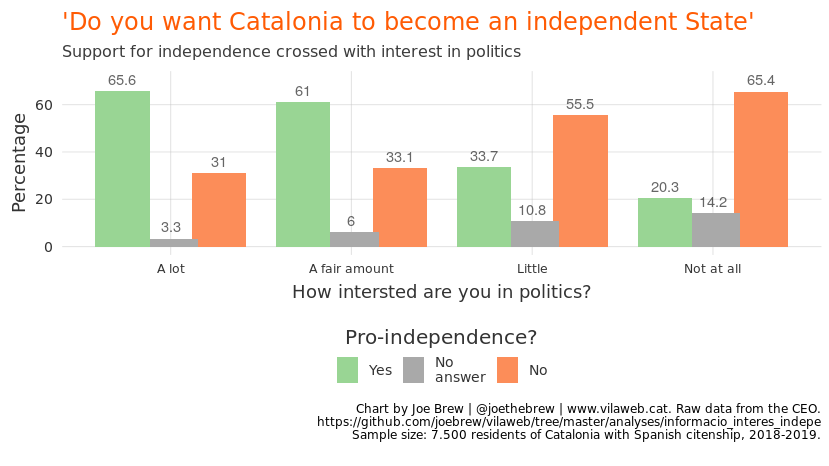 If we look at level of information (grau d’informació), a similar trend emerges: 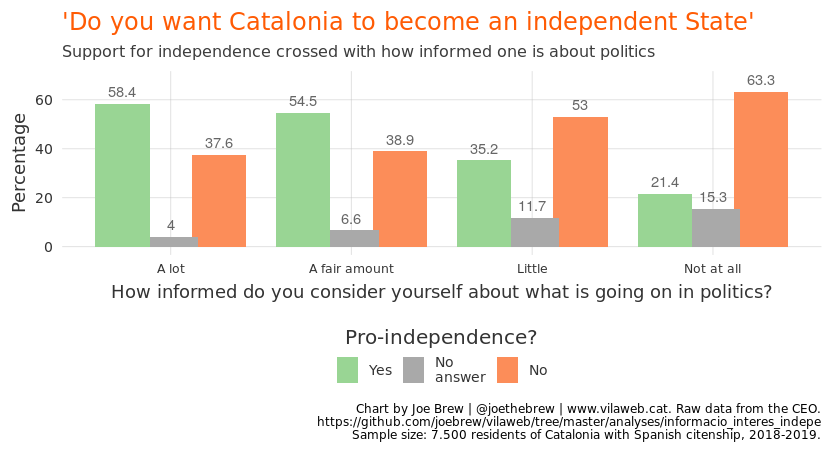 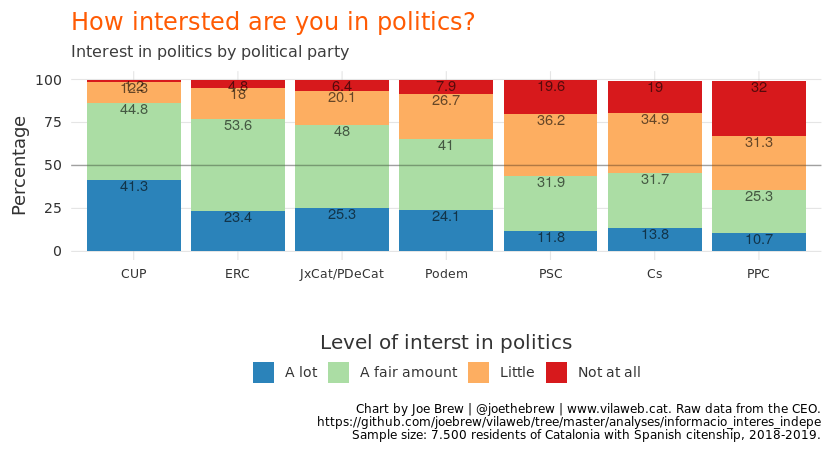 And the below shows level of information about politics by political party: 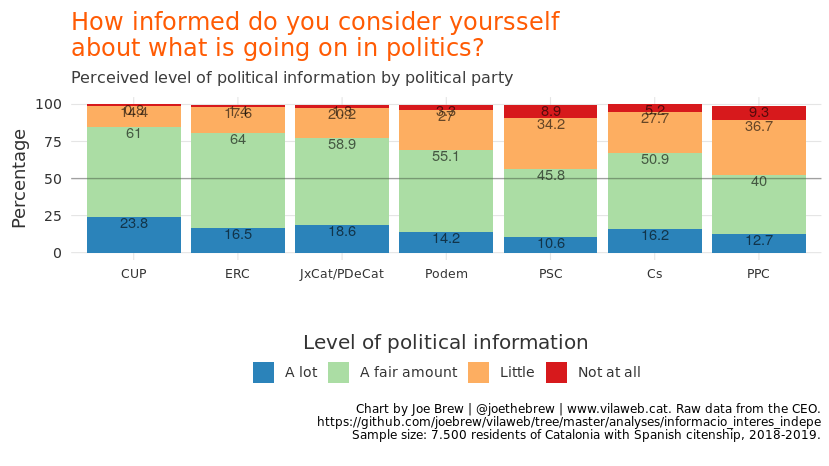 A majority of voters of all parties consider that they are fairly informed about politics, but the rates are higher among pro-independence party voters than pro-union party voters.

In Catalonia, engagement in what’s happening in politics (interest and information) is associated with greater levels of support for independence. In the sense, the pro-independence movement is quite unlike the populist movements with which it is often compared (Brexit, Trump, etc.), not only in terms of political engagement, but also on a myriad of other measures. Whereas support for neo-populists like Donald Trump, Boris Johnson, or Marine Le Pen are generally driven by a disatisfaction and disconnection with politics, pro-independence Catalans profess high levels of interest in politics.

Opposition to self-determination and independence stems largely from Catalans who say that they are not interested in what is happening in politics, and consider themselves to not be very well-informed about it. Whether paying attention to politics causes support for independence, or whether the causal chain is the other way around (ie, being in favor of independence causes one to engage in politics) is unknown. It is also unknown the extent to which self-rated values (level of interest, level of information) are reliable. In either case, those who support continued union with Spain should be concerned that their base is largely uninterested, and considers itself uninformed, of what’s going on in politics.

All code and data for this article are available here.