Andrej Hunko: ‘Between Spain and Germany, there is a close relationship in matters of security and secret services’

An interview with the German representative of Die Linke party, who has visited the Catalan political prisoners

Andrej Hunko is a member of the German parliament for the radical left party Die Linke. Responsible for European affairs and linked closely to pacifist movements and left-wing activism, he visited the Catalan political prisoners on Wednesday in Lledoners. He was able to see them all except Turull, Forn, and the female prisoners, who are in different prisons. VilaWeb was able to speak with Hunko to find out about his views on the Catalan case, why the German radical left expresses such empathy with Catalan independence supporters, and his experience visiting the jail.

-Why did you want to visit the prisoners?
-By visiting the prisoners I want to send a message to Europe. This is very serious. There is an upcoming trial. And no one is talking about it enough. The arrest of Puigdemont prompted your case to be followed closely. But that’s no longer the case. Now nobody is speaking about Catalonia. I want to keep pursuing my work and my idea: Europe must deal with this issue.

– And how did the visit go?
-I saw all of them, except Turull and Forn. The atmosphere was very positive, they seemed very strong to me. Romeva told me that they would be convicted, but they would win eventually because they would prove they had not committed any crime. And that it is just Spanish revenge, but they would take the case to Strasbourg. I was impressed by the prisoners’ integrity. They give off a very positive energy. The prison authorities treated us very well. The politicians told me that this is a fight to defend democracy, and against the extreme right. 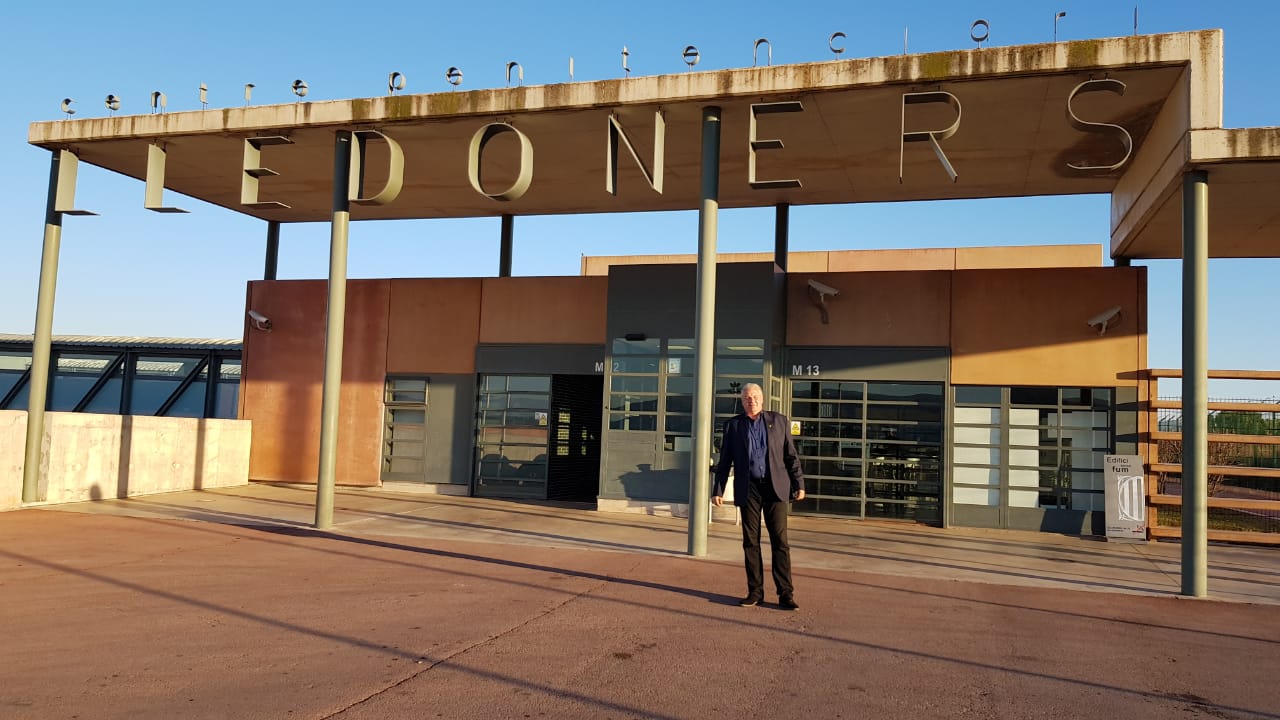 -Just so we’re clear, what is your opinion of the Catalan case?
-I am not pro-independence, I am in favor of finding a democratic and peaceful solution within the European framework. I see what is happening, and the arrests. And I think that now is the time to come here to send the message to Europe that the Catalan question must be addressed. And I would like to take it to the parliamentary assembly of the Council of Europe, too. I already did so in October. And I want to do it again.

– And how did the debate go in October?
-It was very interesting. We managed to have a debate. A debate without conclusions, it is true, but the positions were able to be heard. I did the introduction and I saw how all the representatives of the old Central European nations were more or less in favor of a democratic solution. The Swiss even offered to help. And at the other end were the Turks, representatives of Azerbaijan, Serbian nationalists and the Spanish representatives, everyone except Podemos.

– And in the German parliament, can’t you bring it up for debate?
-I tried to get the Catalan case entered into the program that we call ‘Parliamentarians protect parliamentarians’. We help representatives from around the world who are in toruble, who are victims of repression. We did so with politicians from Turkey —for example, the Kurds— and from Egypt. I tried to do it with the Catalans, and with the Jordis. But they refused, saying that Spain was an EU country.

– How did you come to learn of the case of Catalonia?
-In Germany I met with Catalan MPs from the CUP, ERC, PDECat and other parties, thanks to Marie Kapretz, delegate from the Catalan Government. And thanks to the ANC, as well. And I was one of the international observers on the First of October. For me, personally and politically, the referendum on October 1 was very important. Very much so. On that day I thought that Europe had to get involved. It is a very serious situation and we cannot look the other way. Since then I’ve been very involved. For example, I wanted to do a lot of research on what would happen if a Catalan politician was detained in Germany for a European arrest warrant. When Puigdemont was arrested, I was already fully informed.

-I beg your pardon?
-Months before the detention, I asked German parliament experts what could be done, and what not, in the event of an arrest. Just in case it happened. And the experts I consulted told me that a European arrest warrant didn’t necessarily have to be granted. And that rebellion was not on the list of automatic cases. In fact, the court ended up saying just this.

-Why do you think Puigdemont was arrested in Germany? Is it coincidence?
-I don’t know. The European warrant was in force. But it is certainly a question that I also asked myself. Why did they stop him in Germany? Between Spain and Germany, there has historically been a very close relationship, especially in matters of security and secret services. For example, with the Blue Division [the fascist volunteer force that Franco sent to aid Hitler in the eastern front] .

-The Blue Division?
– The German state pays the pensions of the Spaniards who were part of the Blue Division. There are very few left. But they are paid, and officially. It is just an example of the close relationship between the two states. These last few years, on the subject of the independence movements, the relationship has been maintained. And so Germany took a very tough stance in favor of Madrid after the First of October and did not condemn the police violence. But all this tradition, which lasted for so many years, changed with Puigdemont’s arrest.

-Why?
– Let’s say that for the first time contradictions appeared among the German authorities. The line that had been maintained up to that moment was no longer homogeneous. For example, the Justice Minister made some statements that no longer followed this line of close collaboration. There was a small change. I also met President Torra and I told him so. We won the battle. We won the debate as to whether Puigdemont had to return. And Puigdemont, I must say, ended up making a very good impression. I don’t know why, but people liked him. He’s a good guy, they said, who tried to do something for the people who voted for him. When people read that they wanted to lock him away for thirty years for rebellion, they couldn’t understand. Should this man be in prison for thirty years for having organized a peaceful referendum? The arrest of Puigdemont changed things, indeed. Before then, people didn’t think the same way about the Catalan situation.

-What did people think prior to that?
– They said that the Catalans were nationalists lacking on solidarity, who did not want to contribute to helping poor people from Extremadura. And they made parallels with Bavaria. That was the argument. And that argument changed.

-Why does Die Linke, a radical left-wing party, hold this position with respect to the Catalan independence movement?
-We do not support independence. We support a peaceful and democratic solution. And we clearly stand against repression. This is the official position of the party. The CDU has a link with the PP. The German liberals, with Ciudadanos. The SPD with the PSOE. And the Greens and us are the ones that give them more support, yes. But the Greens, as they are so pro-European Union, have more reservations. They don’t want to enter into a conflict. In the European Parliament, if you follow it closely, it is also the left that has put the Catalan issue on the table. Like we did. We had the debate within our party. And our position won the debate.

-You have visited the prisoners. Have you met Puigdemont in person?
-Yes. I think he’s a good person. I consider him a true democrat. And I would not say a politician of the right. Maybe he is a conservative. A soft conservative. But, above all, a democrat. I met him in a more or less secret meeting, to avoid the press, just after he was released. And again, openly, he came to see me in my office in the German parliament. I gave him a tour of the parliament. He coincidentally came on one of the parliament’s open-house days. It was full of people. And people recognized him, stopped, and asked for a photograph. He was very likeable.

-And in Germany, beyond Die Linke, how do people view the situation?
– Before, the Catalan case was in the headlines. They invited me every week to talk to one side or another. Since summer, however, it is no longer talked about. Since the release of Puigdemont, it has lost a lot of visibility.

– Have you met with Spanish politicians?
-Yes. On October 4th. After the rally, Pablo Iglesias organized a meeting in Madrid. I went, as I was here. With the AVE … an impressive train. In Germany we don’t have such trains. Our trains don’t work. Pablo Iglesias, Alberto Garzón, the leaders of UGT and CCOO, Jordi Xuclà, the Basques, they were all there, and in the end Pedro Sánchez did not show up. There were people from the European Greens, me and some others for Die Lienke, and representatives of Melenchon, in France. Iglesias wanted dialogue and not confrontation, for Rajoy to be pressured to negotiate, and also for Europeans to become involved. We had a great debate.

– Have you ever met representatives of Ada Colau?
-I would say that personally, no. But as we are left-wing, the parties have a connection, yes.

-Any advice for those in favor of independence?
-Continue with the peaceful and democratic path. It wins you a lot of sympathy. It’s extraordinary, your case. Not only in the political sphere, but also in that of civil society. I get many emails that tell me that.

-You were an international observer on 1-Oct. What did you think? Did it meet international standards?
-Your referendum cannot be compared to others. I’ve done many. I have been to Turkey, in the Kurdish areas, and more. It’s not like the Scottish case, for example, because there was no agreement between the two sides. We came as witnesses, rather than as an official delegation. We were clear on that from the beginning. I think you should have a referendum, and that the two sides should give it their blessing. And I realize that it will be very difficult, given the Spanish tradition. I understand that this is part of the problem. For me, the October First referendum is part of the democratic process. And it advanced that process. And I have no doubt about the results. 90% in favor. And a 42% turnout. That said, maybe the other side did not turn out. I see that the situation in Catalonia is divided. And that there is a very clear majority in favor of holding a referendum. We, on the left, were very critical of the Kosovo referendum. It was not done in accordance with international law. And part of the German left also says this: we do not want Spain to be another Yugoslavia, which was split by war. There is another part of the left, to which I belong —and that for the moment is winning the debate—, which clearly sees that your case is different from that of Yugoslavia. Especially the political leaders, who are different.