Meridiana Avenue will become a wave of collective hope that will bring to parliament the will to build a new country and a new, better and more just, society’, said Jordi Sánchez, president of the Catalan National Assembly (ANC), during an event to announce the details of this year’s September Eleven pro-independence rally.

ANC and Òmnium called on supporters to pack Meridiana Avenue, one of the longest and widest streets in Barcelona, from Ciutadella Park to Rosselló Pòrcel Street. The rally will cover a distance of approximately 5.2 kilometres.

After three years of historical demonstrations on Catalonia’s National Day, which falls on 11 September, this year’s event will serve as the kick-off for the official electoral campaign for the 27 September elections, which secessionist parties regard as a plebiscite—a chance for citizens to say yes or no to building a new, independent Catalan state. 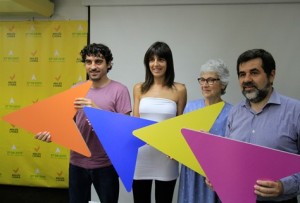 This time around, the rally’s colour will be white, and organizers are asking participants to wear all-white. However, there will still be a touch of colour along the avenue, as participants will carry a series of arrow-shaped cutouts in various colours, which are to be raised over their heads. This will colour-code the demonstration’s entire route, dividing it into ten sections, symbolizing the ten policy priorities emphasised in ANC and Òmnium’s campaign to influence voters before the 27 September elections: territorial balance; diversity; solidarity; openness; sustainability; equality; innovation; democratic regeneration; education and culture; and welfare and social justice.

A giant arrow will make its way along the rally’s entire route, and each time it reaches the next colour-coded section, participants will raise their own coloured arrows over their heads.

You can find a diagram of the rally here:

As in previous years, participation in the rally will be by registration, which will open in mid-July.