Catalan mayors talk in Madrid about police violence during referendum 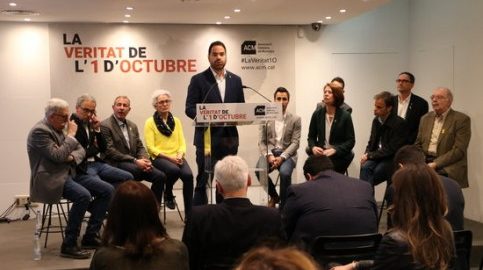 Catalan mayors from municipalities that saw police violence during the independence referendum on October 1, 2017, denounced the “lies” told by Spanish police officers testifying during the trial at the Supreme Court.  On the stage, four of the eleven mayors attending the event at the Madrid Blanquerna Cultural Center spoke on Wednesday.

“We’re disappointed to hear them speak of a reality that’s very far from what we saw and lived through in Catalan towns” said mayor Joan Badia from Callús in an event entitled ‘The Truth About October 1′. “We defend the strength of ballot boxes to find a solution to problems”, he added.

The event, organised by the Catalan Association of Municipalities (ACM), began by showing a video compilation of police violence from referendum day in certain towns and cities, alongside  testimonies of high-ranking Spanish officials claiming that there was no police violence and that their interventions were “exquisitely proportional.”

Among those alleging this have been former Spanish president Mariano Rajoy, former vice president Soraya Sáenz de Santamaría, other high-ranking police officials – including some in charge of organizing the operation to stop the referendum – and all Spanish police officials to take the stand.

“Images speak a thousand words, and that’s surely why they don’t allow the videos to be shown in the trial” commented ACM president and mayor of Sallent David Saldoni, referencing that videos have been banned to be shown in the referendum trial by the presiding judges who allege they will watch them “in due time.”

The first mayor to speak was actually seen in one of the videos, and is seen to be pushed by an officer. Joan Badia criticized that he’s been accused of attacking the policeman: “What hurts the most are the lies” he said. Callús is one of the nineteen towns included in the act – the very same included in Spanish judge’s Llarena’s case against the leaders as proof of voter violence.

A wound that is still open

Other politicians to speak were Jaume Asens, the deputy mayor of Barcelona, and Marta Madrenas, mayor of Girona. Asens proclaimed to the audience: “We came here to remind you that what happened on October 1 is a wound that is still open throughout the country that still calls to us.” He also described referendum day as a “shameful operation that outraged the world.”

Madrenas, meanwhile, said: “We stand before you as witnesses of some facts that surely in some time will be recognized as a dramatic day of the history of our country.” She further qualified the testimonies alleging otherwise as “made up” and “false.”

Some of the municipalities have filed suits against the police violence and have not ruled out doing so for perjury or making false statements on the stand, a crime they allege many of the witnesses are committing.