The European Parliament announced in a statement released on Monday that it recognizes pro-independence Oriol Junqueras, Carles Puigdemont, and Toni Comín as MEPs despite Spain’s attempts to block them from taking up their seats in the chamber.

“Following the judgment of the Court of Justice of the European Union dated 19 December 2019, at the plenary sitting of 13 January 2020, the European Parliament will take note of [their election as MEPs],” the document reads, going on to state their status is “with effect from 2 July 2019” – the date of the parliament’s constitution. 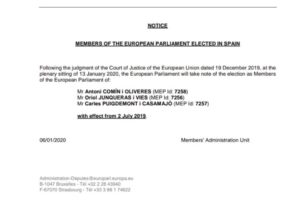 Exiled Catalan president Carles Puigdemont and former Catalan minister Toni Comín, in exile in Belgium following the unsuccessful 2017 independence bid, have picked up their definitive MEP passes on Monday. The two politicians had been provided with temporary passes on December 20, the day after the European Court of Justice ruled that Esquerra Republicana’s jailed Oriol Junqueras had parliamentary immunity from the moment he was elected MEP in May despite being prevented from taking up his seat by Spanish authorities, with the same applying to Puigdemont and Comín.

This comes three days after Spain’s electoral authority decided to veto jailed Junqueras from taking up his seat despite the December ECJ ruling stating that he had parliamentary immunity from the moment he was elected MEP in May.

Although the Esquerra Republicana leader remains in prison with a 13-year sentence for sedition and misuse of public funds for his role in the unsuccessful 2017 independence bid, Puigdemont and Comín have since been allowed entry into the chamber having previously been barred from doing so and were provided with MEP accreditation on December 20.