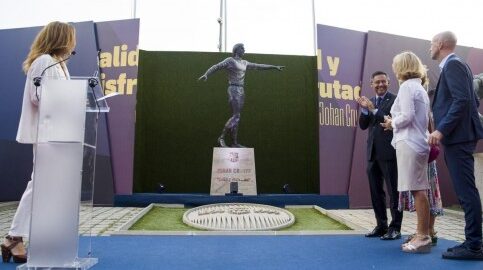 FC Barcelona has immortalized one of its all-time most beloved legends, Johan Cruyff, who died of lung cancer three years ago. Some believe that the former Barcelona player and coach is the father of team’s modern era, an era that has produced the likes of Pep Guardiola, Xavi, Andres Iniesta, and of course, Lionel Messi. And he is not only a Barça legend, but the entire country’s: Cruyff coached the Catalan national team from 2009 to 2013.

On Monday the Camp Nou forecourt was the scene for the unveiling of a new statue honoring his memory. The club was represented at the event by president Josep Maria Bartomeu and other board members, while the former Barça player and manager’s family included his wife Danny Cruyff, and his daughter and son Susila and Jordi. Other guests included the Catalan president Quim Torra and the consul for the Netherlands in Barcelona, Dirk Kremer. The many former players included Carles Puyol, Sergi Barjuan and Albert Ferrer.

But this is not the only tribute of the week. On Tuesday night, FC Barcelona inaugurated the new Johan Cruyff stadium, the first part of the new Espai Barça, at the club’s training camp. Catalan B and junior team games are set to be played at the pitch, which was inaugurated with a match between FC Barcelona and Ajax Amsterdam youth teams, Cruyff’s two main clubs as a player and coach.