Interview with one of the world's most acclaimed clowns, who recently announced that he has terminal cancer

It’s not easy to interview an artist when you admire him so much that you also love him. It’s even more difficult if the artist announced a few days ago that he is suffering from terminal cancer and has not much time left to live.

I have seen him perform a lot of times since, working as a waiter, I discovered him in 1989 at the Carpa Bardelona, ​​at the bottom of the Rambla in Barcelona, ​​when those in command invented something called the Cultural Olympiad. The last time I saw him was last Sunday, at one of the Cabaret Cabron galas scheduled within  the Barcelona Festival of Fools, which takes place until 2 October.

I can’t find the right words to describe Jango Edwards, stage name of Stanley Ted Edwards, born in Detroit in 1950 and living in Barcelona for many years now. While I wait for him to arrive at Teatre de la Gleva, I ask Nola Rae for help. She is an Australian mime who studied with him in London in the 1970s, with whom he founded the Friends Roadshow company and who was his partner. Rae says that Jango Edwards is a magnet, that he is bossy (“of course, he’s American”), that he also knows how to be a pussycat and that it’s hard to shut him up. She considers him the king of clowns, which is a qualification that Jango would never accept.

From the first time I saw him, what captivated me the most about Jango Edwards was his energy. The technique, the gags, the madness, the laughs, yes, but this overflow of energy on stage for me is only comparable to that of another American, strangely enough, Bruce Springsteen. I also love his speeches at the end of a show, which have always reminded me of those of a preacher, although I don’t know if I will dare to tell him. Those speeches contain a message, as he says, that captured me and changed my life, like it did to thousands of people around the world.

So, this is an interview made by someone who also thinks that Jango is an immense clown, with a subversive and libertarian spirit, who snucked in between hippies and punks, who revolutionized and updated the role of clowns with his nouveau clown movement, convinced of the power of smiles and the superior value of freedom. Here comes Jango Edwards, who has replaced his long mane with an OK on the top of his head and who stumbles a little bit before he sits in a chair in front of me. 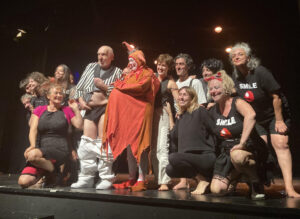 – I had some time to chat with Nola Rae and she told me that at some point you wanted to become a rock clown. Is that true?
– I actually wanted to be a journalist originally, and I was an architect for a time, but I ended being a clown for a number of reasons. The thing is I used to write a lot of poetry when I was young, and I started writing songs, I have 300 of them, and we fooled around, we said we were musicians, but we never played one sound and we never had a record company. I did rocky things. I sang rap and reggae, I sang ska and country western and circus music, everything, and I pretended to be a rock clown. But to do that kind of work you have to be better than the ones you are making a parody of.

– From a wannabe journalist and a premature architect to a clown. How and why?
– It’s a very long story but I’ll make it short. When I was in college I had a lot of money. I was already an architect at 17. I was building golf courses and landscaping. But I wasn’t happy. It was in the 60s, with free love, drugs, lots of sex. I started looking for something that made me happy and looked at the eastern religions. On one trip I made I had 50 hits of LSD with me and I was reading a book called “The Fourth Way”.

– Where did the fourth way lead you?
– I finished the book in a mountain in Morocco, I took the last 4 hits of acid and 40 sheep walked over me and a dog licked my balls. I was 20 years old and everything felt in place. There are two lessons in the book: number one is know who you are, and number two is help yourself by helping other people. And this is why I became a clown and why I did all I have done in life. 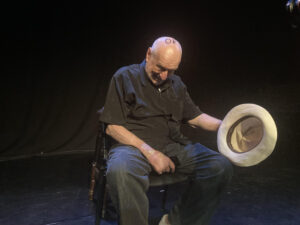 – And who are you?
– Knowing who I am was the hard part, it’s the hard part for everybody. It took me 16 years to do it, but I found my freedom and now I live in heaven on earth, while most people live in hell. I’m a free man and the greatest gift we give as clowns is bring people back their freedom. It’s nothing religious, it’s about honesty. I didn’t become a clown, I found my clown again, because we are all born as clowns. The best definition of clown is the greatest actor in the world, not the prostituted version, it has nothing to do with a red nose or a stage.

– What has it to do then?
– Iit has to do with freedom. Clowns are soldiers that will help you recover your freedom. When you were born you had no passaport and no money, no jealousy, you were born pure: a clown. From the moment we are born we start our journey towards death, which is inevitable, and we start surrendering because of fear, because the world is full of borders and rules and regulations that take our freedom away. They use them to control us.

– Talking about the inevitable death, you announced recently that you have cancer and not much life left…
– Live is really short and that’s why we should have fun. Smiles are our weapons. For me, the Barcelona Festival of Fools this month, with all my friends around, it’s a great way to go out, it’s a joy. I’m having a geat time, although sometimes I have problems to keep balance on stage because I can hardly walk anymore. It’s funny because since I said that I’m dying, all of a sudden everyone is very interested in me. That’s kind of sad too, because I’m the same as I always was. Dying is inevitable. It’s fine. I’m having fun dying, it’s a great character to play. After those 53 seconds in television where I told that I was dying, I started receiving letters from all over the world and people are coming to see the Cabaret Cabron galas from the festival. It’s ok, but people should not come because of me, but because they will have fun. 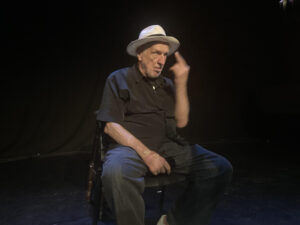 – A lot of what you say, both onstage and offstage, sounds close to anarchism to me. Are you an anarchist?
– [Shouting] The fucking anarchy would change the world, wouldn’t it? This world is fucked up! Look at governments, at religions, at all this shit. I don’t take any side, I make fun of everything. Yes, I am an anarchit, professionally. I’m a cabron, professionally. I’m an asshole and I get paid for my anarchy. I come out and shit on stage or I make poetry, while the Queen of Holland is watching. Anarchy is me and Tortell Poltrona on stage trying to do a magic trick. Our world is in trouble and I hope we can save it, but I don’t think we will. I pray for it.

– Don’t tell me there is no hope…
– The only hope is laughter and fun and smile. We are all soldiers in an army. But with my nouveau clown family, everything we do on stage is both profund and simple. When you laugh at me, you are laughing at yourself. Because I know who I am, I can reflect who you are. You are journalists. What you write can change people. That’s why I wanted to be a journalist too, because I wanted to tell something to people. But then I saw that people forget what they read and I stopped with the idea. Unless you win a Pulitzer, journalism is passé. It’s a shame but the people who control the media have destroyed journalism. You don’t know what’s good or wrong anymore. They call real news fake and fake news become real. The only thing I watch today is my feet.

– You say you want to help people but you want to change them!
– No, I just want them to find their freedom back. They were born free. People live in hell. They get a job and once in a year they have one month of holiday. Me, I don’t work. I have holidays eleven months and every now and then I get a job. There’s a very simple exercise to check if you are happy: stand in front of a mirror, smile for a minute as big as you can, and if at the end your face hurts, you are doing something wrong with your life.

– And then what?
– You should ask yourself if you are really happy. People say they are happy, but they are not. When people see me smile, they think I want soething. Yes, I want them to smile too. Whenever I had big success, I left. I made a lot of money, but now it’s gone. During covid I had no work, but friends helped me. I’m happy because I’m free. When I’m on stage, I get a lot of power and energy from the audience. All clowns use diferent methods, but they all share the same heart and the same mind, they all have the same motivation. We don’t compare to each other, we don’t compete, we are family. 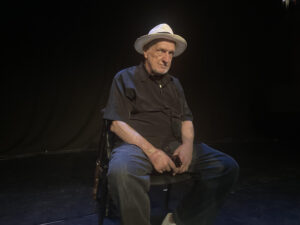 – Yes, but don’t punch me, please.
– Well, we are all preachers. But the nouveau clown movement preaches that each and everyone be equal to their own. I do what I want to do, and I don’t tell you what you should do. But I’ll tell you something. Back in 1971, walking in the street, a man came to me and said: you are looking for something. And he made a gift to me and my piano player, that was to take part for free in his seminar. After doing a seven-week session course I was ordained a priest of the Church of Awareness. So I am a priest.

– I can’t believe it. You are a real preacher!
– I’m not Jango, Jango is a myth, my real name is Stanley the Priest! For 50 years, I have used the last minutes of my shows to preach, to tell everyone why I do what I do, and if one person gets my message, I win. When I finish my show, I go out to the door and I don’t have a collection plate, but I gather positivity and smiles and hugs. It’s noy easy now with my health and my energy level. But if my body gets paralyzed, I’ll do mimes in a box! You should not worry about death. When it comes to you, use it positively, because you are what you leave. So these days, when I’m on stage with all my friends around, I think for myself: what better moment right now to die right here on stage, boom, hey, it’s over.