During a ceremony in remembrance of those who fell for independence

Spain’s PM Pedro Sánchez made a floral tribute in Riga in front of the monument to those who fell for the independence of Latvia. A Catalan pro-independence surprisingly welcomed him at his arrival. Sánchez is in the second stage of his tour of the Baltic and was with Latvia’s prime minister, Krisjanis Karins. The monument was built in 1935 in memory of the soldiers who died in the Latvian War of Independence.

Prior to Sánchez’s arrival at the foot of the monument, a man and a woman carrying the flag stood just behind the spot where the members of the Spanish delegation were to be placed. Sánchez and Karins passed in front of them while a band performed the national anthems, and those carrying the flag stayed until the end of the event. 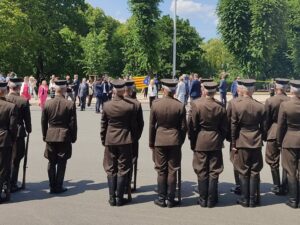