Who are the party frontrunners in Catalonia’s election?

Berenguer de Cruïlles, a 14th-century bishop, became the first ‘President de la Generalitat’ in 1359, heading a Catalan institution that was born to provide some self-rule to the Courts at the expense of the King of Aragon – two sides frequently at odds. The Generalitat evolved over the centuries until stripped by the Spanish monarchy in 1714, was reborn in 1932 during the Second Spanish Republic, only to be abolished under Francisco Franco’s dictatorship in 1939 and then restored yet again in 1977.

Now a completely different institution, it represents the entire Catalan administration but the debate over the degree of self-rule it has or should have continues, often clashing with the Spanish state. The ‘President de la Generalitat’ has been the head of the Catalan government for over four decades now, but the identity of the next president remains more uncertain than ever.

Who the contenders vying for this position are is now clear, and while three out of the nine main party frontrunners are favorites, the parliamentary system in place in Catalonia means that, in theory, any of the 135 incoming MPs could be selected. Here’s a guide to each of these parties’ top candidates. 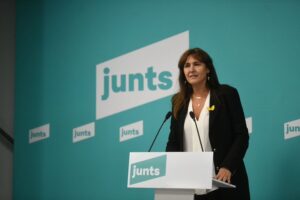 Years in politics: 3 years. In 2017, she was elected MP in the vote held in the wake of Spain’s imposition of direct rule after the failed independence push.

Education: Catalan philology and a Ph.D. in Romance philology from the University of Barcelona.

Career: Before entering politics, she was a university professor and also presided over the Institute of Catalan Letters for four years from 2013. She is involved in an ongoing court case for allegedly favoring a friend with a public contract. Already an MP, she became Catalonia’s culture minister in 2018. Ten months later, she quit to become an MP in Spain’s Congress, a position she still holds.

Chances of becoming president: Very high. JxCat will have to obtain more votes than ERC in the election to claim the presidency in the event of having to reforge the same coalition. Her party was also behind in the polls for the 2017 election but ended up ahead by 10,000 votes, clinching the presidency. At the time, the leader of the 2017 independence push, Carles Puigdemont, was her party’s frontrunner. Borràs would need to top the pro-independence bloc and persuade ERC and perhaps CUP to support her. If she were to be successful, she would become Catalonia’s first female president. 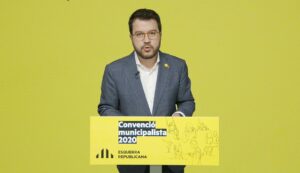 Years in politics: 14 years. He was first elected MP in 2006 after having headed ERC’s youth section since 2003.

Career: MP since 2006, in 2016 he was appointed economy secretary. It was from this post that he had a relevant role in the independence push but always denied using public funds to hold the referendum or seeking international funding for a potential independent Catalonia. With ERC’s president in jail, in 2018 he was the party’s most senior member in the coalition government with JxCat as vice president. He became interim president in late September 2020 after President Quim Torra was barred from public office.

Chances of becoming president: Very high. At the moment, ERC is leading in all polls with a slight advantage over JxCat. Yet, in order to become president, Aragonès needs the support of a majority of MPs either in the pro-independence bloc (possibly not only JxCat but also CUP) or among left-wing parties (although they have ruled out the Socialists). After repeated disagreements with JxCat, forging a coalition with them is not a given even if Aragonès tops the election.

Years in politics: 33 years. He was elected councillor of the City Council of La Roca del Vallès in 1987 and joined the Socialist Party in 1995.

Education: Uhilosophy degree at the University of Barcelona and master’s degree in Economics and Business Management at IESE Business School.

Career: Mayor of La Roca del Vallès (1995-2005), Director-General for Infrastructure Management of the Department of Justice of the Government of Catalonia and Spain’s Minister of Health since January 2020. On 30 December 2020, PSC leader Miquel Iceta surprisingly announced his decision of stepping back as candidate of the party and that Illa would be the head of the candidacy.

Chances of becoming president: Medium. He is very likely to be the most voted unionist politician but the bloc is far less united than it was 3 years ago. Illa would struggle to obtain the support of Ciudadanos or the People’s Party in the unlikely event that parties against independence amass a majority of seats—they would go from having 57 MPs to at least 68. 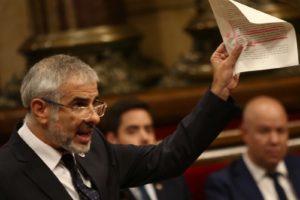 Years in politics: 8 years. He got involved with Cs in 2006 when the party was created and was first elected MP in 2012.

Education: Law at the University of Barcelona.

Career: He spent decades as a lawyer before getting entering politics. He has been MP in Parliament since 2012, gaining influence in Cs, to the extent that he was appointed the party’s parliamentary leader in 2019 when Inés Arrimadas left her seat. As the leader of the most voted party in the 2017 election but not in government, Carrizosa has headed the opposition since then. He was one of the most outspoken defenders of Spain’s unity in the chamber during the 2017 independence push.

Ideology: Staunchly unionist and against engaging in dialogue with the pro-independence camp, European liberalism, Euro-enthusiast.

Chances of becoming president: Very low. His party topped the vote in 2017 but has since then lost much of its support in every subsequent election. Carrizosa’s party is expected to come in fourth, with only a slim chance of becoming president in the unlikely event that the unionist bloc obtains 68 seats and he emerges as the agreed-upon candidate within the bloc–or very unexpectedly beats the Socialists. 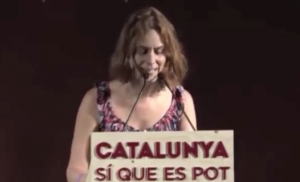 Years in politics: 5 years. She was involved in the 15M occupy movements and became a member of Podemos in 2014.

Career: Before entering politics, she had worked as a journalist and as an advisor for press offices and electoral campaigns. She has been MP in Parliament since 2015. Albiach was one of the Podemos members who helped found Catalunya en Comú, its Catalan ally, in 2017. During the independence push, she was clearly against independence but did not oppose a referendum on the matter.

Ideology: Left-wing, anti-austerity, anti-globalization, republican. Not in favor of independence, but in favor of a vote on the matter.

Chances of becoming president: None. CatECP is not expected to obtain over 10 MPs of the Parliament’s 135. She could play a role in a potential left-wing alliance led by Pere Aragonès, who would like to build a front with not only the pro-independence camp but also with CatECP, in favor of a referendum. 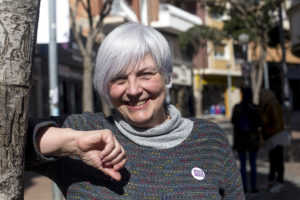 Candidate: Dolors Sabater (Badalona, 1960). An independent – she is the head of Guanyem, and the final name of their joint list is still unknown.

Years in politics: 5 years. A local activist, she ran in the 2015 Badalona election with no previous experience and emerged as the city’s mayor.

Education: Teaching degree with a focus on special needs education.

Career: She taught at a secondary school for decades. In 2015, she led an anti-austerity pro-independence coalition and became Badalona mayor after an agreement with other left-wing forces. Yet, three years later she was ousted by the Socialists and the People’s Party due to her involvement in promoting the 2017 referendum and independence bid. She did not succeed in winning the local 2019 election.

Chances of becoming president: None. CUP is not expected to obtain over 10 MPs out of the 135 in the chamber, its all-time high. Yet, in the past two elections, the party has been essential in providing the two mainstream pro-independence parties with enough seats to govern. 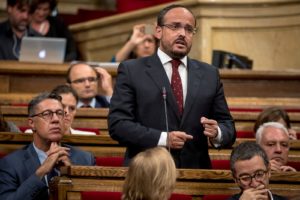 Years in politics: 17 years. He first became a local councilor in Tarragona at age 27.

Education: Political science and a master’s degree in political communication from the Autonomous University of Barcelona.

Career: He combined his post as a local councilor in Tarragona with a job as a professor at Rovira i Virgili University until 2012, when he became an MP in Spain’s Congress. Since 2015, he has been an MP in the Catalan parliament, where he has gained importance in the past few years until becoming the PP leader in Catalonia in 2018. He barely held onto his seat in 2017 and had to wait for mail-in votes ballots to maintain the post.

Ideology: Conservative, staunchly unionist, and against engaging in dialogue with the pro-independence camp, Euro-enthusiast.

Chances of becoming president: None. While the People’s Party is expected to obtain more MPs from the 4 MPs they currently have to up to 10, their chances of playing a role in the formation of a new government are meager: the unionist bloc would have to beat pro-independence parties and PP would have to support the Socialists–their eternal opponents in Spain – for the presidency. 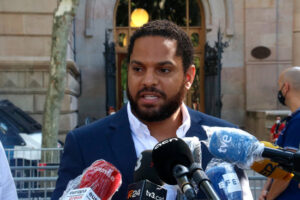 Education: Dentistry at the International University of Catalonia.

Career: Before getting involved in politics, he was a dentist and a professor in this field. He was a member of the People’s Party for some years before quitting and joining Vox in 2014. He is the party’s most well-known member in Catalonia and has been an MP in Congress for Barcelona since 2019.

Ideology: Far-right, staunchly unionist, soft Euroscepticism, in favor of deporting irregular migrants. Garriga is the only non-white presidential candidate in the election.

Chances of becoming president: None. Vox is set to make its breakthrough in the Catalan parliament but has almost no chance of playing a key role in governance. In the unlikely event that unionist parties prevail, the Socialists would almost certainly not seek the backing of Vox. 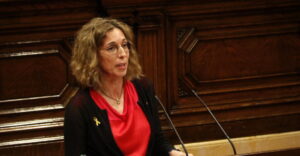 Years in politics: 9 years. She got involved in politics as local councilor in Igualada.

Education: Law and international trade at the University of Barcelona.

Career: Before entering into politics, she oversaw exports for several companies. In 2011, she was elected local councilor for the now-defunct CiU coalition. In 2018 she became Catalonia’s business minister, but was sacked when JxCat split from PDeCAT, CiU’s party. Chacon was the only minister of either of the two forces who decided to remain in PDeCAT.

Chances of becoming president: None. In fact, PDeCAT will struggle to obtain any seats at all. JxCat is set to win most of the votes of former PDeCAT supporters. Yet, those who choose Chacon could be key to stopping a JxCat victory. If she ends earns a seat, she could be key if ERC and JxCat together fall short of winning a majority—and she could help the pro-independence camp claim an unprecedented 50% of the vote.