Who are the young protestors of the Catalan revolt?

The Spanish government and Catalonia’s regional power have joined forces to launch an attack on the young people who have been on the streets since last week spearheading the response to the repression and police violence. It is extremely disappointing to see how starkly this contrasts with the proud government of 2017, with the Catalan mayors rising their staff of office rather than begging for a meeting in Madrid; also with the dignified conduct of Catalan interior minister Quim Forn, under most difficult circumstances, as well as the Catalan police force, then led by Major Trapero. But that doesn’t matter now. History will judge everyone and we have more pressing matters to contend with.

At present, the truly worrying fact is the criminalisation campaign launched against our younger generation, against our children, grandchildren, nephews, nieces, the children of our friends, who have been putting up a relentless fight for days against authoritarianism and the indescribable police violence that we are all suffering in the streets of our towns and cities. Everyone can see how police violence has reached a level more becoming of a dictatorship than a democracy that is justifiably trying to restore public order. On this point, we were hoping that Catalonia’s political class, especially the government, the president, ERC and Junts per Catalunya would stand with the people rather than join in the criminalisation efforts of the Spanish state, whose only goals are humiliation and submission. By doing the latter, our representatives have missed a historic opportunity and have created a crisis of confidence whose ultimate consequences remain to be seen.

All of us who have walked the streets these days (and nights) have seen it: there is a generation of young people who have decided that now is the time for them to wage the struggle of a lifetime. If they lose, there won’t be a future for them and for Catalonia. And so they want to win. And they are willing to go to any lengths to do so.

Are there agents provocateurs among the protestors? Sure. Are there other people who do not support independence and are merely joining them for the ride? Of course there are. What kind of world do you think we are living in? Agents provocateurs are doing their job and we must remember that at all times. But that is not the point. The point is that the vast majority of youths who are standing up to the police in order to defend us all are actually our own children. And we cannot desert them, nor do we have the right to criminalise them. They don’t deserve that at all.

We may agree with their methods or object to them, we may not quite grasp the purpose of some of their actions, we may be afraid —we are very afraid— for them, for their actions and for what they might do to them. But how can you possibly oppose them? After all, it was us who used to take them by the hand to all the independence marches, with promises that a new country where you would be able to live with dignity was just around the corner. We bought them the t-shirts and the independence flags, even the black one that symbolises fighting to the bitter end. It was us who taught them the chant “October 1st, do not forget, do not forgive!” They saw us enraged, shouting at the police on the day of the independence vote, the very same police that is beating them up now. We comforted them on the night of the referendum while they were crying tears of indignation because the Spanish state had battered their families, the parents of their friends. We excitedly told them about the ballot boxes that had travelled around without the paramilitary Guardia Civil seizing any, we told them how Puigdemont changed cars under a road bridge to dodge the Spanish police helicopter that was monitoring him. We told them how in one village locals had improvised a game of chess to hide the ballot box and, in another, the votes were counted inside a church, during mass. We swore to them that we would not stop until we won.

It’s been two years of massive demonstrations since the Republic was proclaimed, with the utmost dignity, but we must admit that they have failed to force the Spanish state to budge an inch from its authoritarian stance. Europe’s officialdom has no incentives to concern itself with the constant human rights violations in Catalonia and, indeed, the world is watching us, but sitting on a distant fence. The world is watching Hong Kong, Tunisia and Ecuador. In the last two years, young Catalans —who are much more world-savvy than us— have been quietly drawing their own conclusions about it all, till last Monday. It was the day when Spain made its final, most serious mistake and the time which young Catalans had prudently given us to try to achieve something tangible finally ran out. 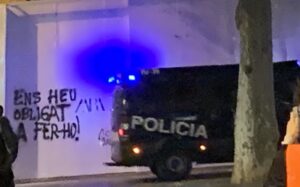 I took this picture by chance in Barcelona city, on Passeig de Gràcia with Gran Via. Several Spanish police vans mounted the pavement in front of me at high speed while chasing three lads who were running away with a pro-independence flag. Police could have killed someone with that criminal action, one of the many we are seeing on a daily basis. When I reviewed the photo, I noticed some fresh graffiti that I believe is a perfect summary of what is happening: “You made us do it”. It summarises in one sentence a quote by JFK from 1962. Amidst the civil rights revolt that had broken out in America, Kennedy proclaimed that “those who make peaceful revolution impossible will make violent revolution inevitable”.

The ones who have made a peaceful revolution impossible are Spanish PM Pedro Sánchez and his predecessor, Mariano Rajoy. They are to blame for what is happening in Catalonia these nights. Nobody else is. And they will be guilty until they accept that the solution is “Peace, freedom and self-determination”, the three demands of Catalonia’s democratic revolt as  proposed by exiled Catalan minister Clara Ponsatí, which have just been endorsed by the Council for the Republic . The incidents would end this very night if the Spanish authorities agreed to hold talks on the basis of those three demands. It is as simple as this: end police violence, free the prisoners and allow Catalans to ratify October 1 via a mutually-agreed referendum. That’s what we must focus our efforts on.

By criminalising young Catalans, Madrid is looking to split us down the middle, separating the “good separatists” from the “bad separatists”. But their attempt is so cynical that it should raise alarm bells with everyone. Can’t you remember how the good separatists, Jordi Sànchez and Jordi Cuixart, gambled all their personal prestige to prevent any violent outbursts and they were rewarded with a prison cell? Do you honestly think that anyone who agrees to collaborate with Spain should expect anything different in the future, once they are no longer useful to Madrid? Are you really that gullible? Have you learnt nothing since October 2017?

Older readers will recall how, with deep emotion, I have praised and applauded the great dignity of your mobilisation. I have felt very proud of this generation, the one that was deceived by Spain’s transition following General Franco’s death but ultimately acknowledged that and now strives to fix the mistake tirelessly. Today I am begging you not to be fooled. Get out on the streets and show young Catalans your solidarity. Help them anyway they need, especially the ones who have been jailed (and there are a few of those). They will hold the front line for as long as it takes. They know how to do it and are willing to, for as long as necessary. But it is essential for them to know that we look up to them and they make us proud.

And let us persuade one another, the old and the young, that we can defeat the tyranny here and now, if we stay focused and together. Peace, freedom and self-determination.

PS: I know you do this all the time anyway, but please make sure you share this on all your social networks.