An interview with the newly-elected leader of Canada’s Green Party, who has close ties with Catalonia

Annamie Paul (1972) was elected leader of Canada’s Green Party at the beginning of October. For the first time ever, a federal party will be led by a black person. In fact, Paul is only the fifth woman to ever lead a federal party in one of the countries which —seen from abroad— strikes you as one of the most advanced the world over. During our video call Annamie Paul discusses the goals of her term, her extremely close ties with Catalonia, where she spent seven years of her life. In fact, our conversation is conducted in Catalan, from start to finish, as she is fluent in our language. 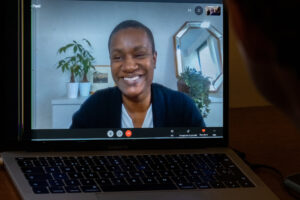 —How come you speak Catalan?
—My family and I lived in Barcelona for seven years. I haven’t spoken the language for two years, so please excuse my mistakes. As far as I’m concerned, when you speak the language of the people, you’re showing them respect. My husband and I made the most of the free lessons offered by the City. Our children went to a local Jewish school and then onto Aula. And their Catalan is flawless. In Barcelona we set up a hub in Sant Pau, the Barcelona International Public Policy Hub. It acts as a catalyst for other organisations on big challenges such as the climate crisis and people’s rights. My husband, Mark Freeman, runs the Institute for Integrated Transitions  and that is still based in Barcelona city, although it is involved in projects are all over the world. Our mission is to get new projects off the ground. We were in Barcelona from 2011 to 2018. I remember the independence referendum on 1 October 2017 as an experience that touched our family and friends. Some of the latter, like Raül Romeva and Dolors Bassa, were closely involved with the Catalan independence movement

—How do you see it, from a political viewpoint?
—In a democracy you must have the opportunity to voice your views. The people must have a say on the big issues, for instance independence.

—On 3 October you were elected new leader of Canada’s Green Party. What goals have you set for your term in office?
—It is up to the members of the Green Party to decide the party’s policies. I will be in charge of communicating their decisions. For us the climate crisis is the biggest challenge. As the leader of a federal party, it is also very important to make it clear that the pandemic is a major concern for the Greens. And we propose policies to tackle the urgent needs.

—Seen from abroad, Canada seems a trouble-free country.
—Ha! Not at all. We have a major opiates crisis. There has always been some tension between the authorities and the native peoples. We are short of social programmes and, therefore, some people get no protection. Canadian society is better than others, but we have problems, too. Like every other country. Here many people use illegal drugs as relief for their mental health issues. We do not have a national mental health programme. And many people don’t have a home. In those cases, they turn to drugs.

—You are the first black person —and a Jewish woman— to lead a federal party in Canada. Correct?
—Indeed. I am the first black person and the first Jewish woman to represent a federal party in Canada. It is very sad. In fact, I’m only the fifth woman to have ever represented a federal party. Canada’s political life is not diverse enough. Like Catalonia’s. And that’s despite Toronto being very multicultural. About 60 per cent of all Toronto residents were born outside Canada, myself included. Before myself, we had a Sikh man lead one of the larger federal parties, but I am the first woman of colour who represents a Canadian party in a country where 20 per cent of the population is from a non-European community.

—You are going to the polls on 26 October.
—It’s a by-election. When, for some reason, an MP steps down, we have a new election to replace them. Now we have two lawmakers who have quit. I am the Green Party’s candidate for the Central Toronto constituency. I represent the party, but I haven’t been elected to parliament yet.

—How many seats does the Green Party have in the federal parliament at present?
—Three. It’s a modest number. Our election system, like England’s, is first-past-the-pole.

—How are you holding up ahead of the vote?
—I’ve asked PM Justin Trudeau to cancel the elections because I don’t think the conditions are right for people to vote safely. We are going through a pandemic emergency. It’s not the right time to go to the polls. Many voters have hazardous jobs. But for now the answer is no. Yet the situation is very changeable at the minute. It remains to be seen whether we will vote in October at all, or later on. 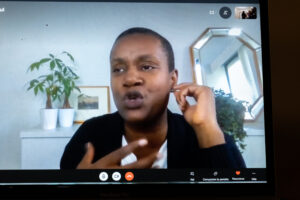 —Do you intend to come back to Catalonia?
—As I said, my husband’s institute is based in Barcelona. We have good friends there. Catalonia is one of the most beautiful places on earth. And we own a little house on Minorca. In fact, my husband and I decided that if I don’t get elected, we’ll hop on the first plane to Catalonia and on to Minorca. The quality of life in Catalonia is the best I have found in the world. It’s hard to imagine life without the chance to go back to Catalonia. On vacation or for other reasons.

—Better quality of life than in Canada?
—In some ways, yes: public transport is faster and less expensive than in Toronto. The quality of life is better in Catalonia for people who have no income or wages. There is stuff I don’t like so much. For instance, there aren’t enough opportunities for people not born in Catalonia. The institutions are very homogenous. My children would struggle, even though they speak perfect Catalan. I can’t imagine they’d have the same opportunities as their Catalonia-born friends. Things are better in Canada in that regard.