“Verifiability” and “falsifiability” are basic principles of science. To understand the world, scientists generate theories and then verify these theories by trying to falsify them. This method – the scientific method – requires that theories be “falsifiable” by nature. For example, Bertrand Russell’s famous (satirical) theory that a miniature teapot is orbiting the sun but is too small to be viewed by telescopes is not falsifiable (there is no way to disprove it) and therefore, not scientific.

Some statements are unquantifiable and, by extension, unfalsifiable. Take, for example, this statement: “Donald Trump is a good President”. I happen to disagree with it, but I can not demonstrate that it is a false statement because the adjective “good” is a question of personal opinion. Like the existence of Bertrand’s Russell’s teapot, the “goodness” or “badness” of Trump is unfalsifiable.

Unquantifiable statements are conjectural, unknowable, or simply subjective. These statements are abundant in politics. There is nothing wrong with these statements, per se, but discussions around them are generally not very productive. One person affirms something unquantifiable, the other affirms the opposite, and the conversation ends, with no agreed-upon basis for truth or even a mutual method for evaluating the other’s perspective.

We’ve all had these conversations; and we all know that they lead to nowhere.

Fortunately, not everything is unquantifiable. Much of what is said in politics is quantifiable, and therefore, falsifiable. Strangely, even though data exist to contrast certain affirmations with reality, very few bother to explore the data. Politicians repeat phrases (many of them demonstrably false) over and over again, leaving citizens with the impression that either (a) the false statement is true or (b) the false statement is simply a matter of opinion (ie, that the affirmation is unquantifiable or unknowable), when in fact it is not a matter of opinion.

What a shame that we continue to let our politicians manipulate us in this way. We live in the most data-rich era of history – when claims are made, they should be put to the test. Falsifiable claims should be falsified (if false) and verified (if true). Quantitative claims should be quantified.

As someone who keeps my eye on Catalan and Spanish politics, I have been amazed at the level of falsehoods that are repeated, routinely, with almost no response from data journalism. Many people treat quantifiably false statements as simple matters of opinion – but they are not! One can think whatever they want about the “goodness” of a politician or the “desirability” of a political outcome; but there are certain areas where the data simply do not support certain interpretations.

There is another word for these quantifiably false statements: lies. In this article, I’d like to explore five of them.

For this analysis I’ll use data from the Baròmetre d’Opinió Política (BOP) of the Catalan Centre d’Estudis d’Opinió (CEO). It is by far the best source of political data on Catalonia, not just because the survey is carried out in person (whereas most newspaper surveys are done by telephone, causing a significant level of bias), but also because the raw data are publicly available here.

In addition to being rigorously sampled, the BOP also publishes its raw data, meaning that it can be downloaded, analyzed, etc. by anyone. This has the advantage of allowing for the “crossing” (encruament) of different variables (which is precisely what I do in this analysis).

Catalan sovereigntists are frequently accused by their pro-Spain counterparts of not being democratic. At its most extreme, this accusation crystalizes into the affirmation that wanting to vote on a divisive issue is equivalent to a “coup against democracy“.

But are pro-independence Catalans less “democratic” than their pro-union counterparts? There is no straightforward way to quantify how “democratic” one is, but good data on the subject do exist. For example, in mid-2018 the BOP asked 1500 Catalans how they felt about democracy as a system of government.

The below chart shows the results of that survey. Most Catalans of all ideologies prefer democracy, but the rate of saying “democracy is always preferable to any other form of government” is significantly higher among pro-independence Catalans. In other words, pro-independence Catalans cannot be accused of being “non-democratic” if one takes into account the data on opinions on democracy.

Unlike the previous affirmation, this one is most often lodged by the Spanish unionist left. The accusation is that the Catalan independentist movement emerges from a strong desire among Catalans to share less of their resources with others (ie, be less “solidary”). 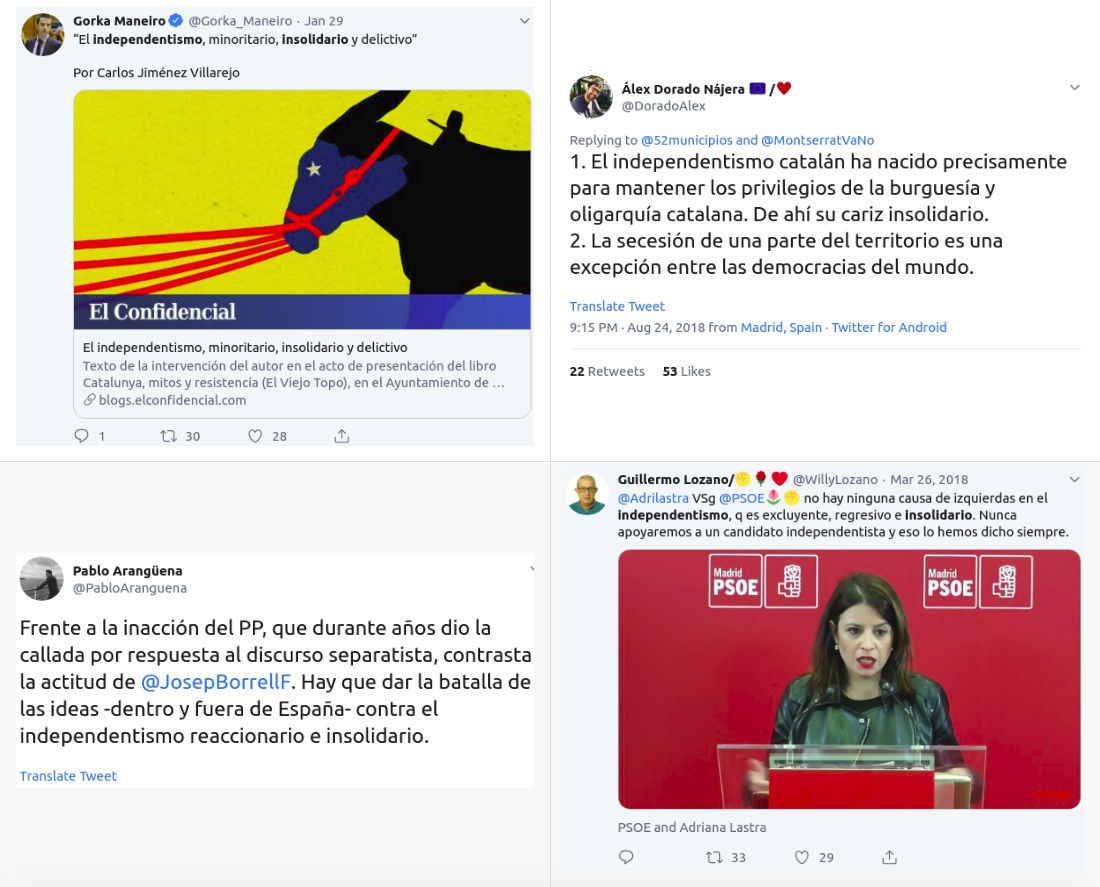 Is it true? Do Catalans in favor of independence exhibit attitudes less akin to solidarity than those opposed?

The data show otherwise. Catalans – both those in favor and against independence – are very much in favor of economic solidarity. For example, an overwhelming percentage support government efforts to reduce income inequality (with slightly more independentists in favor than unionists): As if this weren’t enough, we can also examine how Catalans of different political stripes evaluate their political leaders. Take, for example, the average rating given to pro-independence politicians by Catalans as a function of their political ideology. Note that all receive significantly higher ratings from the left than the right. Now compare the previous chart with rating of Catalan pro-union politicians by ideology of survey respondents. Note that all (including those who aspire to be “centrist” or “leftist”) actually receive higher ratings from right-wing Catalans. In terms of quantifying who is “right-wing”, another measure is nostalgia for the previous right-wing dictator, Francisco Franco. The percentage of Catalans who believe Franco had “positive” aspects is significantly higher among voters of pro-union parties than in the pro-independence bloc. Finally, one last measure of right-wingness is positioning on social issues. For example, on the quesiton of homosexual rights, pro-independence Catalans are far more progressive/leftist than their pro-union counterparts: Some politicians, particularly those on the political right, frequently accuse the Catalan independence movement of being xenophobic and supremacist. 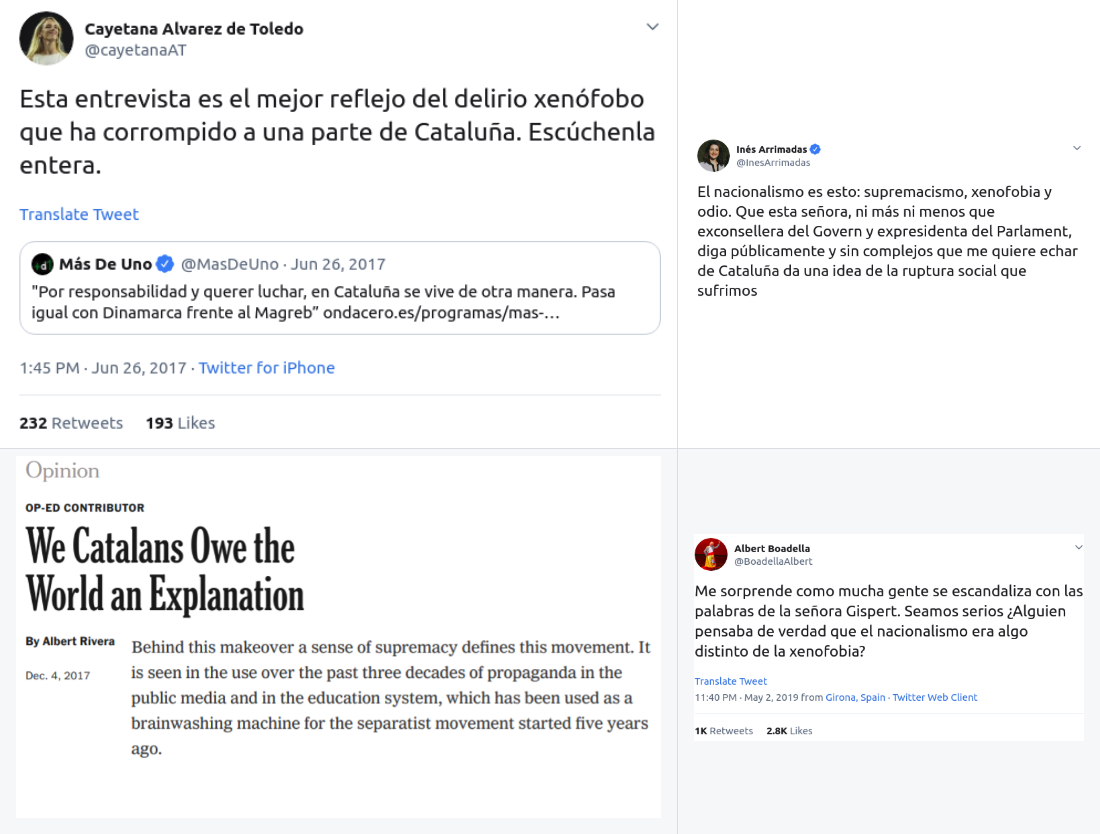 Are they right? Xenophobia and supremacism are difficult, but not impossible, to quantify. Forunately, the BOP asks a question which gets right to the heart of the matter: the extent to which one agrees with the (blatantly xenophobic) following phrase: “With so much immigration, one no longer feels at home”.

The data (below) show that there is indeed a great deal of xenophobia in Catalonia (nearly one in three Catalans don’t feel “at home” due to immigration). However, the rate of xenophobia is 1.6 times higher among those opposed to independence than those in favor. If we examine by party, we can better pinpoint the source of xenophobia in Catalonia. Ironically, the parties whose politicians most frequently accuse independentists of being “xenophobic” are, in fact, the parties with the greatest rates of xenophobia. A majority of the supporters of both the PP and C’s in Catalonia express xenophobic sentiments in regards to immigration. Pro-union Catalan politician Miquel Iceta recently stated that with the Socialist party there “will not be independence, nor a referendum on independence, because Catalans don’t want it” (Video).

This statement is simply false.

In regards to the number of Catalans who want independence, the most recent data suggest that more do than don’t. In a hypothetical yes-no referendum, in other words, independence would win by 4.6 percentage points. Iceta is not only wrong about whether Catalans want independence (it’s close, at least), he’s especially wrong in suggesting that Catalans don’t want a referendum. They do. 78,7% agree with the phrase that “Catalans have a right to decide their future as a country through a referendum”. What’s especially strange about Iceta’s assertion is that the percentage of Catalans in his own party that support a referendum is greater than 50%. Reality should not be a partisan issue. One doesn’t have to be pro-independence to want to clearly understand what the independence movement is. In fact, those who consider Catalan independentism to be a problem should be the most concerned about the repeated lies and mischaracterizations of the movement. After all, the correct “treatment” for a “problem”, requires a correct “diagnosis” of what the problem is.

Is the independence movement xenophobic, non-democratic, anti-solidarity, right-wing, and minority? No. The data are clear that it is none of these things. However you personally feel about the question of who should govern Catalonia, you should care about truth in political discourse, and be concerned about lies. A solution to the current crisis in Catalonia will come through when all stakeholders recognize reality for what it is, and then create legislation which fits with that reality. Though distorting reality can sometimes lead to short-term electoral gains, it will never lead to long-term political solutions.