Online discussion on the criminalization of freedom of expression in Spain

On Thursday 4 February, with rappers Pablo Hasel and Valtonyc

According to the anual report on artistic freedom by Freemuse, an independent international organisation defending freedom of artistic expression, Spain is one of the most repressive countries with 14 cases in 2020, even more than its followers Iran or Turkey. Two of the musicians included in this report will take part on Thursday 4 February in the online discussion “Spain: imprisoned for singing. The cases of Pablo Hasel and Valtonyc”, together with lawyer Isabel Elbal. The event will be hosted and chaired by MEP Clara Ponsatí, who is in exile to avoid prison for her role as Catalan minister during the 2017 independence referendum. 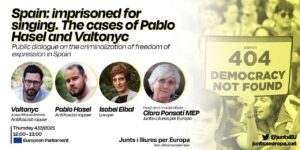 Pablo Hasél has been given a ten-day period to enter jail by Spain’s National Court’s after being convicted for some lyrics and tweets criticizing Spain’s crown and institutions. The Catalan antifascist rapper has been convicted to two years and nine months behind bars for two separate cases relating to his opinions in songs and tweets, which the judiciary considers “glorification of terrorism” and “slander to the crown and the Spanish law enforcement”. His colleague Valtonyc went into exile to Brussels in May 2018 for similar reasons and is now waiting for a final decision over his extradition to Spain from Belgian authorities.

The online event will start at 12am and will be livestreamed via YouTube by Junts i Lliures per Europa, the political organisation at the European Parliament that Clara Ponsatí belongs to.